This Is What I Used To Call A Brown Bag Post

So first of all, has anyone in the history of the universe ever voted for someone based on a sign like one of these?
"Oh, I'm going to vote for Maddox! His sign is the biggest!"
"But look- Lane has the most signs! I'm voting for Lane!"

What a buncha crap.

This is NOT a buncha crap right here, y'all. This is real, true, pure sweetness. 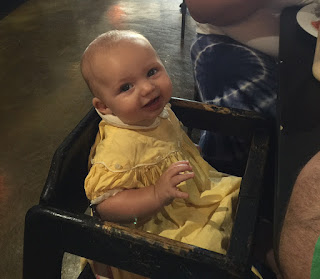 Miss Magnolia June at the Indian buffet for lunch. The dress she's wearing is one that I think might have been mine and might have been made by my mother. I do not know for sure and it's quite possible that I just bought it at Goodwill or something because someone had made it by hand. It was missing a lot of buttons and I did find some replacements and sewed them on so there is that. It's a cute dress and it was sweet of Lily to dress her pretty little daughter in it for her outing today.
She's starting to crawl, that one. She can belly-scoot wherever she wants to go already.
Oh, babies! Why do you have to grow up so fast?

As soon as I walked into the restaurant, Owen greeted me at the door with some flowers they'd brought. Lilies and roses because Lily is Lily Rose. I almost killed the poor things in the car in the heat but they're perking up nicely now in their silver coffee pot with cool water. Jason got to come today too because he was off work and Hank and Anna came as well. 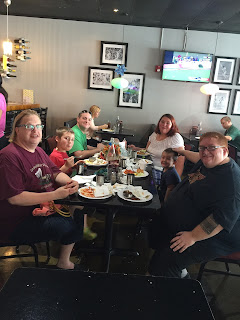 Maggie's down there behind the flowers.
Lily also brought a Publix carrot cake which I love because it reminds me of the A&P's old Spanish bar Cake. Any of you remember that? I just googled it and damn! A lot of people remember Spanish bar Cake. There's even a Facebook page for it. And there are many recipes posted which try to re-create it. I might try that one day. In my spare time. If I get really bored. Meanwhile, there's the Publix carrot cake which is almost as delicious. Okay, it's probably better. It looks like this 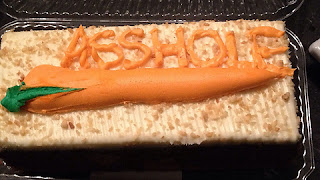 although I think you have to special order it to get "Asshole" written on it.
In general, carrot cake is not my favorite due to the fact that we hippies got it into our heads that adding a few shredded carrots to a cake recipe made it healthier and I have suffered my share of that particular baked good in my time.
"Oh! It's healthy! It's carrot cake! And I used honey instead of sugar in the frosting!"
Right.
BUT, the Publix version is delicious. Plus, it's shaped like the A&P Spanish bar cake.
I'm sure it's healthy.
If you're literally suffering from starvation and need extra fat and sugar calories.
Which of course none of us at that table were, but we only ate small pieces. I promise.

After lunch we went to the (wait for it!) Goodwill bookstore. That's always fun. They had a bunch of Cherry Ames books. Remember Cherry Ames? The nurse?
They actually had a copy of this one. 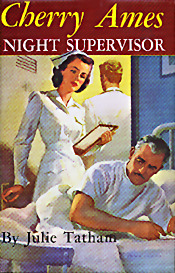 although it was a really old copy and didn't have the picture of Cherry about to give that dude a prostate exam on the cover. Hank says that there were some parody books about Cherry Aimless, Not-So-Good Nurse, and her girlfriend, Nancy Clue. Here's a link.
Owen told me today that Hank knows EVERYTHING.
"No he doesn't," I said, perusing the old books.
"Yes, he does!" insisted Owen.
"Who told you that?" I asked him.
"Hank."
"He knows a lot." I said to my grandson, "But he doesn't know everything."
I'm pretty sure that Owen still believes he does, though. I mean- Hank told him he did. So there you go.

After lunch I decided to go get a pedicure. Why not? Old Mermer on her own for a few hours with nothing she had to do? So I went to the Elegant Nails and a very nice older lady gave me a pedicure and every time she wanted me to move my foot, she'd pat my leg as if it were an old horse.
Pat-pat.
I got blue nail polish. 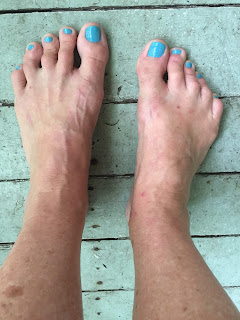 Looks good, right? Except for the age spots and ant bites.
While I was in the chair, luxuriating in the pampering, the woman next to me was watching the TV which was on one of those talk shows with women sitting around a table, discussing things of world-wide importance and at one point, they were discussing the use of "language" in the political world and they had a clip of Donald Trump saying something with the word "ass" in it and then a clip of Barack Obama talking to a group of women athletes, telling them they were "badass" and the woman next to me said, out loud, "That's disgusting!" and I said, "What's disgusting?" because I truly did not know if she was talking about Donald or my president whom I adore, but I was completely ready to show her the very definition of badass if she said it was Obama on whom she was commenting but she just shut her mouth as tight and thin as a sealed envelope and that was the last communication she and I had.

And she might have been talking about the Donald. If not, she was smart to shut her mouth.

Then I went to Publix and ran into two people I know and it took me approximately forty-five minutes to get out of there with my fifteen items but one of the ladies did open a register just for me because I am Lily's mama. I'm almost a damn celebrity at that Publix because I am Lily's mama and also the grandmother of Lily's children.
"Where are the kids?" they ask me if I come in without them which is funny because that's generally the case. One of the items I bought was cornmeal because I have at least, oh, twenty okra pods that I'm going to fry for supper. I think I will probably "fry" them in the oven instead of in the six cups of oil that Paula Dean calls for but they will be good. Besides the okra, it's going to be gourmet leftover buffet tonight and that's going to include last night's chicken and dumplings along with the night before's pork and sauerkraut and no, none of that goes together.
Not one damn bit.
Oh well and la-di-dah and I'll make a salad and sure, that'll tie it all together. Right?

Mr. Moon informs me that for our Friday night date enjoyment, we'll be able to watch The Great British Bake-Off at nine o'clock. I got inappropriately excited at that news.
I am so fucking old.

All right. I do believe I've done enough educating and pontificating and rantificating for one night. I'll leave you to your own devices now. Device away as you will. There will be no judgement from me.