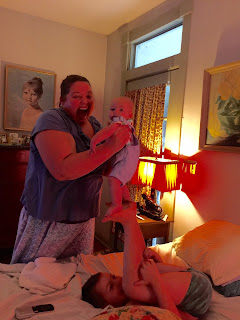 So. This is the sort of thing that was happening at my house today.
And like this. 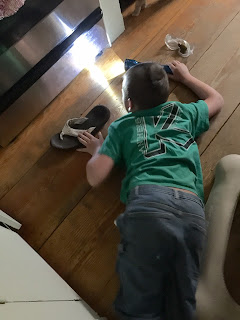 And of course this. 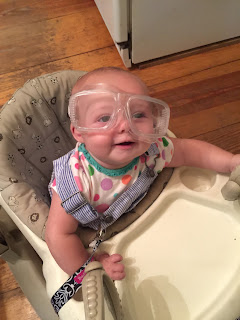 And then we went to the Indian buffet and to Big Lots where this happened. 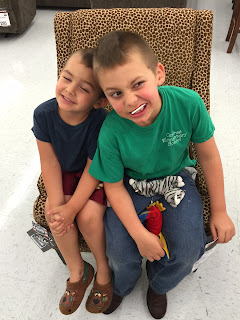 And many, many other things including Gibson shedding his britches as soon as he got here and when we asked him where his pants were he said, "Pants BEGONE!" and ran out of the kitchen and now I'm like...Cuba? Did I go to Cuba?

Yes. Yes I think I did and I seem to have the pictures to prove it.
Okay. Where was I? Fuck if I know.

I haven't spoken much about the people I traveled with. The musicians besides Lis and James Quine were Eva Danielle, Michael Jordan, and Sam Pacetti. I've known Sam for years and had met Jim before but had never met or seen Danielle or Michael play. And they blew me away and represented the US beautifully. The Cubans seemed to love them all. There were others in the group who came along and I'm not going to name them because they aren't performers and as such, they deserve some privacy. But they were all a good group of people and by the end of the trip we'd shared a lot of laughs and experiences, not to mention plates passed around the table. I was somewhat shocked in this day and time to discover that not a one of us had any dietary restrictions and if we did, no one said anything about them. We ate all the food groups and drank all the rum drinks. The last night at the club they ran out of beer but that wasn't a problem since they still had plenty of rum.
God. It's a miracle we all made it back alive.
And yet...we did.

Lis and I adapted to our little nun room. We'd come in at three in the morning with our four keys and Miranda, BLESS HER HEART had to open at least one of the doors for us every night until the last night when we finally figured out out to open the main door. The lock was tricky, y'all. Even in the sober light of day we couldn't figure out that fucker. Lis and I would whisper apologies to Miranda profusely and she'd shrug and roll her eyes and go lay back down on the couch and Lis and I would go into our room and turn on the AC and the fans and take cold showers and put on our cotton nun nightgowns and fall into deep sleep.
We felt so bad about having to wake Miranda up and finally, on the last morning, Yosi came over and did some translating for us so we could finally talk a little and she assured us that it had been no problem and that she had been so happy to have us and we were welcome back any time. 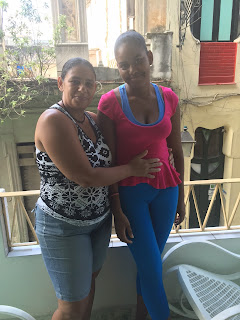 That's her and her daughter. Lis gave them each one of her beautiful ribbon flowers she'd made and we left them a good tip, I think. Through Yosi we got to tell them how much we appreciated the beautiful, amazing breakfasts and coffee every morning and how sorry we were to have woken them up every night. Also, how grateful we were to have been able to visit their beautiful country and Miranda told us that it used to be that Cubans could fly to Miami for lunch and come home for supper and she hoped it would be that way again some day. That the feelings between the people of our country and hers were positive and beautiful, no matter what the governments did.
And of course I cried. Even Yosi teared up a little.
Lis and I were excellent traveling companions. 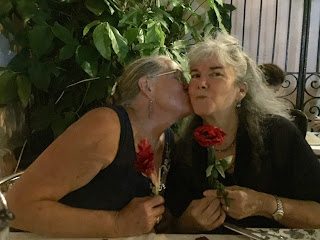 We just purely love each other and I was so happy to be her roadie, despite what I said about carrying instruments. When she was playing I'd tell the person sitting next to me, "Mi amiga!" and point to her. She's so talented and beautiful and strong as hell. We both curse like sailors, we both love our long-time husbands to pieces, we both love to cook and eat, we both like our beverages. And here's something so sweet- while we were gone, Mr. Moon and Lon went to Dog Island together and it made us so happy to think of them playing cards, fishing, and relaxing together. Especially the relaxing part because that's something our fellas rarely do. Well, Lon never. So that was a sweetness in our hearts while we were there.

As I said, we split our meals and that worked out beautifully as the portions were so huge. I know! I don't have enough pictures of food! It seemed like such a fucking cliche at the time but now I wish I had succumbed to the cliche. Here's some ropa vieja, though, with eggplant. 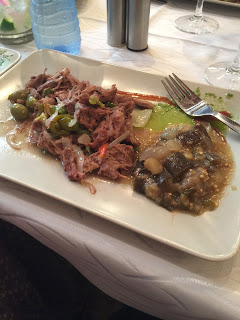 Holy mother of god, that was good. We had salads, we had fish, we had lobster, we had pork, beef and chicken. We had croquetas. Lots of croquetas. The food was simply amazing in all regards. Fresh, beautiful, perfectly prepared. Yosi told us that ten years ago, there WAS no food in Cuba but there sure is now. I do not think that the people of Cuba themselves get to eat the way we ate by any means, though. And this is another of the mysteries of our trip. We saw several government owned grocery stores (although we did not go into any of them) and there was a rations place right across the street from Casa Miranda. It was dark, gray, and people lined up outside and were called in, one by one and would come out carrying a small package. I did not see bakeries or markets although I did see people walking by with loaves of bread in their arms.
Tourism is beginning to happen in Cuba and there seem to be a goodly plenty of restaurants catering to them. Ruben told us that since Raul Castro has taken the reins of the country, private businesses are becoming more common but as I understand it, they have to be businesses you run out of your own home. So even for a fancy restaurant, there may be someone living upstairs. Or in a back room. And most are started with money sent from relatives who have moved to the US, even though sending money to Cuba is illegal, I think. So much is on on the down low there. It just has to be. The businesses which I noticed were the Casas Particular, the restaurants, bars, and souvenir shops which all seemed to carry the exact same ten items which were mostly hats, a few crude carved wooden toys, and...well. That was about it. Fans. Fans were a popular item and Lis bought more than a few and I bought two because dammit- the heat.
One of the main differences between Lis and me is that she does not sweat. At all. Whereas I sweat like...well, I think I set the sweat bar on the high end.

Here I am, meandering again. But yes, Lis and I never once got annoyed with each other (well, she says she never got annoyed with me but I don't see how that's possibly true) and I would carry the napkins and sometimes a banjo if need be and she would navigate me through the streets when that was called for. I get lost in hotels. No. Really. I do. One evening, while everyone else went to a concert in a cathedral, she and I took off alone to explore a little. We were in a square where there were a few things for sale and I was looking at something, and then turned around to see this. 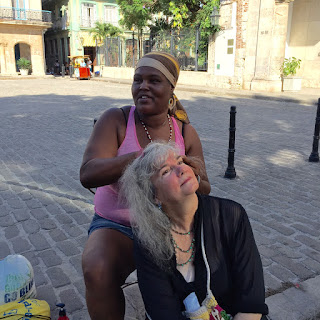 In the time it took me to look at a few pieces of pre-revolution pesos, Lis had negotiated with and begun getting her hair braided by a woman named Jaimie.
Isn't that a beautiful picture? I think so. And after that, we got coffee 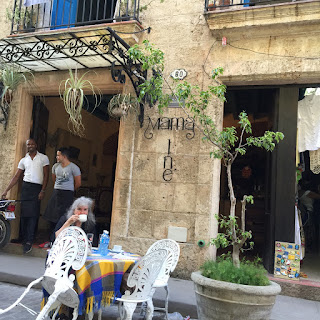 and then made our way to the restaurant where we were all meeting after the concert, solely by Lis's abilities. 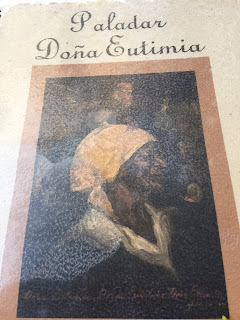 It was nice for us to get there first. We ordered drinks and settled in to wait and listened to the music.

We tipped them well, bought their CD (Los Hermanos), and Lis gave them one of hers. We told them about the next performance of our group at FAC and they promised to come.
And guess what?
They did. 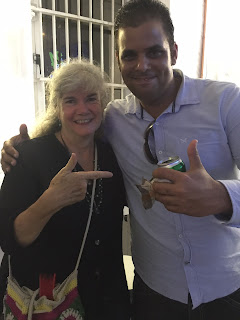 And as a gift, that man brought Lis a tiny oil painting he'd done that day of a portrait of Lis he'd made from her CD cover art. Have I already told you this? God. I'm really losing my mind and the membrane between that world and this is becoming so wavery. It had to have been a huge financial deal for these guys to come to Fabrica but they did. And they let Lis know how beautiful they had found her voice and that they had listened to her CD all day long.

Listen- I have said this so many times before but I do believe with all of my heart that music and art are the true language of communication and that all of the official diplomacy and blah-blah of governments cannot begin to touch the effectiveness of what happens when people share music and art.

It's time/past time for me to make supper here in Lloyd but I will add one thing. When we were at that restaurant where the waitresses sang and danced for us and Ruben answered our questions, I asked him, "What do the Cuban people think of Obama?" His face lit up like a fully-bloomed sunflower in the brightest light of day.
"They love him!" he said.
And later, when I asked him what the Cubans think of the Rolling Stones and the concert they did, his face got every bit as bright.
"They love them!" And he told us that it had been a hugely important thing for the Cuban people to be able to attend that concert, to have the Rolling Stones in their country because for so many years, their music had been banned and yet, of course, as these things go, so many people had managed to listen to them and they represented so much and to have them there, to play for free, had been amazing. That all of the generations had come together to love that music and the men who played it, old as they are now.
"I don't think that anyone else in the world could have done that," said Ruben. "It was beautiful."

It's only rock and roll, y'all.
It's only music.

If anything can bring us all together, it's only that.

Shitfire. I'll carry a banjo any day if it leads to things like all of this.