Learning To Lighten Up

Well, Owen and I had a talk and basically I apologized until my ass fell off and we hugged and when we went back into the restaurant and I went to the bathroom, Lily asked Owen if he loved Mer again and he said, "Who?" and when she told me this it cracked me up so much that I got over feeling bad about it and I know he loves me and he knows I love him and he better not touch that knife again, the knife being what started this whole mess. It's made of a knapped flint blade with a bone handle that someone made Mr. Moon and WHAT BOY IN THIS WORLD WOULDN'T HAVE TO TOUCH THAT?
Or girl, either, for that matter.

And now there's this- yesterday AND today when Owen and I were discussing this whole situation he said it made his stomach hurt to talk about it and wouldn't you know? He threw up this afternoon and has puked again twice and although I very much doubt that it's due to the fact that we had a misunderstanding/altercation/whatever, I still wonder a little bit.
Nah.
Couldn't be.
Right?

Well, here's my fine boy having a good talk with his Uncle Hank after we ate. Can you see Gibson reflected in that window? 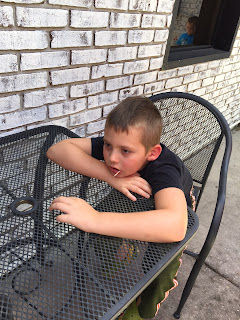 And I'm pretty sure that it wasn't something he ate because Gibson ate the same thing and he's fine.
For now at least.

We had a delicious lunch and afterwards, we sat outside to chat a bit, as we do. Gibson looked at me and said, "Mer! Are you hot? You're getting really red!"
We were sitting under red umbrellas.
"So are you!" I told him. And I took this picture to show him. For once, he posed nicely. 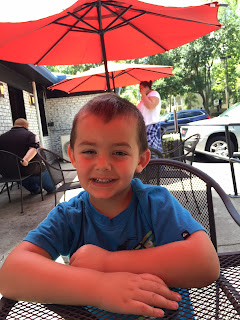 He is growing up so fast but look at those pudgy little fingers. He's still a baby, that Gibson boy.

And of course I had to take Maggie's picture, especially since she's wearing the onesie that Joanne sent her. 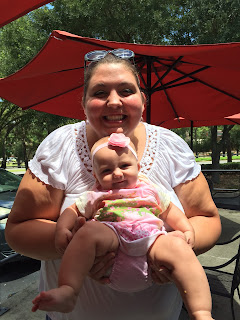 That happy little girl! She is lovin' life.

After lunch Hank and I went to get him an eye exam and order new glasses at the Costco. He knew he needed some and hadn't had his eyes checked in five years so this was his birthday present from me and his Glen Dad. He knew it was going to happen but it was still a bit of a shock when they said, "Bifocals."
He is forty, after all.
And I was a very precocious eight-year old when I gave birth to him.
Uh-huh. You bet.

So that was all good and then Lily texted me about Owen's puking and when I went by Publix I got some ginger ale and oyster crackers for my boy and took them over on my way home. Owen was on the couch with a cover over him, watching a movie and had a giant pot beside him in case he needed to throw up again.
"Mer! Why you here?!" Gibson yelled when I walked in, as he always does.
Of course he wanted ginger ale and oyster crackers too.

I played on the bed for a few minutes with Maggie who thought I was the most hysterical creature on earth. She's just such a goofy beauty love. I mean, that child is just joyful.

And then I came home and did a few catch-up chores around here and Mr. Moon has gone to visit an old friend of his at his lake house to fish and hang out and spend the night. They haven't seen each other in a long time and the friend is getting on in years so Glen called him yesterday and they made this plan and I'm glad. The guy has always been a cranky old thing and I'm sure he's not any less so now than he was twenty years ago. He used to call me "hippie girl," and that was fine by me.
I am what I am although I am now a hippie old lady rather than a hippie girl but same-same.

I just ordered Humpty Dumpty magazine for Gibson, and Ranger Rick, Jr. magazine for Owen which I have been meaning to do for about a year and I feel good about that. Not the waiting for a year part- the finally getting it done part. I remember when I was a little girl and my grandfather ordered me a magazine and how thrilled I was when it came in the mail box although the magazine was something like a horticultural thing for adults and why he ordered that for me, I do not know. I didn't get much out of it but just the very fact that I was getting mail was enough.
I used to order Sesame Street magazine for Hank and May when they were little and I remember how much we used to look forward to getting that thing every month and reading the stories and doing the activities.
Simple times but maybe Owen and Gibson will enjoy their magazines too.
I hope so.

And that's about it. I have realized with great clear certainty that I do not have to be the best grandmother in the world although I really would like to be and it's a comforting thought to know that loving-my-best is enough.

Next week at this time I'll be in Asheville visiting with this little guy. 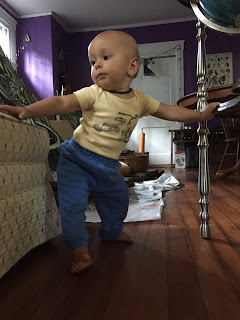 Amen and so forth.