More Hemingway. I Lightly Touch The Shadow Cast By His Life

Good morning!
So. While I have the gourmet egg thing with vegetables and polenta (aka, leftover grits) cooking in the oven for our brunch, I will begin again on Hemingway's house. 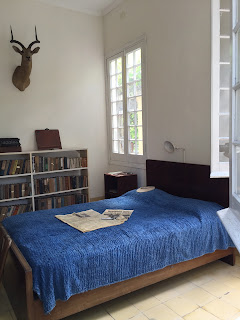 The bedroom. I love the reading lamp over the bed. 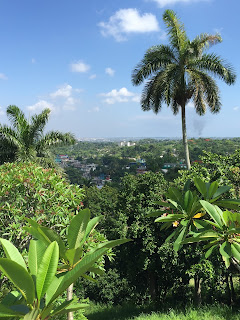 View from the writing tower. 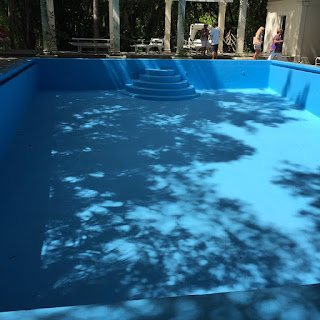 The pool. They could make a fortune if they filled it and charged entry. 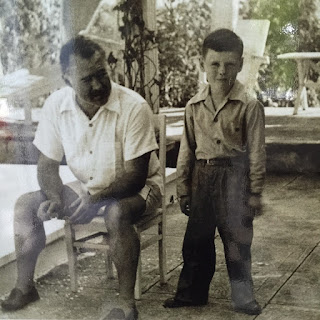 I think this is the saddest and most awkward photo I've ever seen.  Bless that little boy's heart. It must have been hell to have been one of Hemingway's sons. Another thing I'd love to read about. 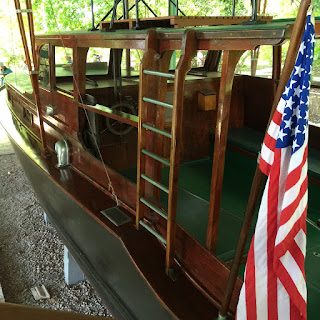 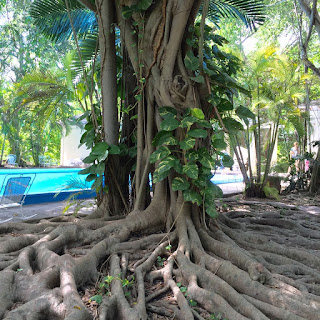 One of the more interesting trees on the grounds. 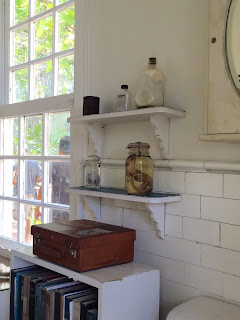 Ernest Hemingway's bathroom! I just had to cringe at the thought of Hemingway looking down from heaven to see tourists from every country in the world, hanging in the windows of his bathroom, taking pictures of his toilet. I myself did not take pictures of his toilet but I did take this photo which shows two jars of preserved somethings in them. One is probably a lizard of some sort. The other? Albino bat? What do you see? Why? Why did Hemingway have jars of preserved creatures in his bathroom? The many, many heads of dead animals he shot wasn't enough?
Oh, Papa. Such a man you were. 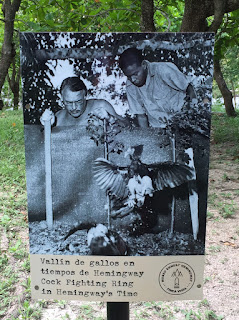 Okay. Now I've just gone and read a lot more about Hemingway, his life, his years in Cuba, his writing, his illnesses, his death. Here's an incredible article written in the August, 1965 issue of The Atlantic by Robert Manning, who had visited Hemingway at Finca Vigia (the Havana home) in 1954, the year I was born. The picture from that article. 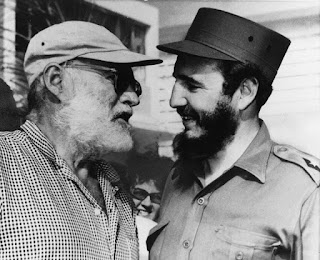 It appears that Hemingway and Castro were good friends until Castro decided to nationalize property owned by Americans in Cuba. That picture was taken in 1960, the year I moved to Florida.

And the rest, as they say, is history and Hemingway moved to Idaho where his health deteriorated drastically, both physically and mentally. He received many ECT treatments and ended up shooting himself with his favorite shotgun. His father, brother, and sister all also committed suicide.

The other day I read a quote and damn if I can remember where it came from. But the quote was, "Life, I forgive you," and I cried when I read it. Reading about Hemingway brings that sentence to mind and I could weep again.

And to tie all of this together in a completely inappropriate way, I give you this picture. 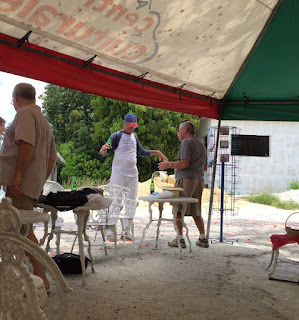 Remember the coach? After we'd toured the house and the grounds of Finca Vigia and visited the gift shop (I bought two postcards), we all found our way to the little covered patio where musicians were playing and you could buy sodas or drinks. And that's where the coach and one of our party met up and began to dance together, beers in hand.
There is nothing in this world that makes me happier than seeing two men dancing together whom you would never in this world think would dance with other men. There is just a pure, honest joy in the music and the moment which transcends all. 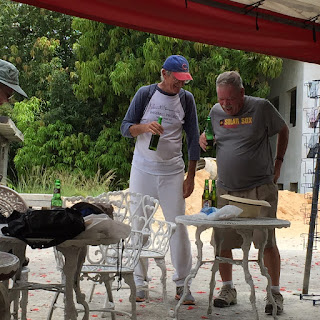 I never quite got the story on the coach, but I think he may have been a well-known ball-player in his day and now, here he is, coaching the Cuban equivalent of Little League, enjoying a beer on a hot summer day, meeting and dancing with sudden, newly made friends.

This is what I loved about my trip. Not just the amazing history, the politics, the food, the new experiences, but the chance encounters, the exchanges made between human beings of so many different races and colors and talents and abilities. The connections made despite the language gap.

Here's another quote I just read and it comes from a review of a new book by a Tallahassee writer whom I have long admired, Bob Shacochis. Kingdoms in the Air. Dispatches From The Far Away.

Travel is the road to perspective; only your dog should recognize you upon your return. Travel lightly, for nothing “can be exchanged honestly, or permanently, except memories and goodwill.”

P.S. Just found this: The Hemingways and Suicide.
It was fifty-five years ago yesterday that Ernest ended his life.