So I was sitting on my back porch talking to a guy on the phone about trying to get some help for a neighbor and all of a sudden I see a damn dark brown animal streaking after my chickens and I couldn't tell whether it was a huge cat or a dog or a jagaurundi.
"Sorry!" I yelled into the phone. "Something's chasing my chickens! I have to call you back!"

By the time I got out there, one of my barred rocks was lying in the grass and a heap of feathers was a few feet away. At first I thought the heap was her wing because, well, it was all confusing and I chased the dog and it ran and then it started raining like bejesus and thundering and lightening and I was running all over the yard and then I called my go-to neighbors when the subject is animals but no answer and then I called Mr. Moon which served no purpose but to upset him as he's on his way home and down near Gainesville.

Anyway, Mr. Moon called another neighbor who came over and there wasn't anything he could do and by that time the heap of feathers which was not a wing but was my little fluffy Banty, Blossom, had disappeared (and I had closed the gate, probably with the dog inside my yard), and then my other neighbor got home and the stupid fucking dog ran up to my him because he's another neighbor's dog who had gotten loose and just decided to go kill chickens for a lark.

The barred rock got up and hobbled into the hen house and now she's in there, lying down in what I call the "dying place" because it seems like that's the spot that all of my chickens go to die if they get the chance. And for all I know, little Violet is dead too but I HAVE seen Dearie, but of course, the dog could have gotten her too while I was running around trying to find it.

That's what happens when you get chickens. I've had hawks take them, a fox, probably coons or possums, and now a dog. Maybe a cat.
Not my cats.
They know better.

All right. I've spoken to my neighbor who got the dog back to his owner and brought me one of my little red hens and I've seen the two banties and the barred rock seems to be up and walking around and I suppose she was just traumatized.
Mr. Moon is driving through a terrible storm and I might take a Valium.

Oh. Here's a text I just got from Lily: 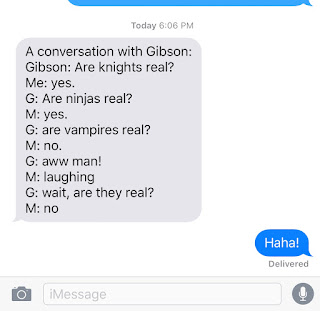 I should tell Gibson that Weredogs are real too. Dammit to hell.

At least we got some rain.