I Want My Badassedness Back 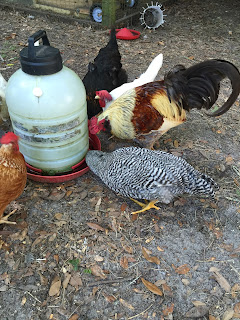 I probably made a huge mistake this morning but nothing new about that. I let the chickens out. The barred rock right in front there is the one that was wounded by the dog. I do believe he's a rooster because I'd just started noticing tail feathers growing in. He's just hanging out by the waterer. He can walk but is definitely injured.
The dog owner came by last night and apologized profusely which was the neighborly thing to do. He's getting rid of the dog and good for him. He did indeed nip a child and supposedly learned to kill chickens when some of my neighbor's birds flew into their yard when he was a pup.
My heart is still rather broken.
In fact, the badass fierce woman who came back from Cuba has disappeared, almost entirely.
I don't know. Sometimes I just feel like I'm tired of everything. Maybe I'm just tired.
Yesterday I felt like I did a horrible job of grandmothering. I told Owen I was disappointed in him because of something he did which was just something any six-year old boy would have done and I hurt his little heart and that heart my old worn-out heart and I can barely stop crying about it.
This heat brings on all sorts of insanity. It's like we barely have enough energy to do what must be done and it leaves nothing left for the sweet luxuries of humor or grace.
But that's probably just an excuse.
Maybe I'm turning into my mother who used guilt and martyrdom to manipulate and control those around her. God I hope not. I'd rather jump off a cliff now and spare the world the pain.
Or maybe I should just move my whiney old ass away from the ones I love in order to spare them the agony.
Does that sound martyry?
Is it too late to become someone new? Someone smarter and wiser and more adventuresome? Someone who might sit down and finish one of the several novels she started writing back in the old days? Someone who, in some ways, gives far less of a fuck and in others, far more of one?

I have no clue. Not one.
But I do have this.


Thank you, Rufus. I loved your daddy, I love you. I probably still love your daddy but now this is about his son.

Despair and redemption. Music. Leonard Cohen (who is the grandfather of Rufus Wainwright's daughter, by the way) wrote the song and if you want to hear it from the master's mouth, here you go.


Some days you just have to remind yourself that there is beauty and there is magnificence and splendor even in this crazy, fucked up world where we are all, at times, crazy and fucked up, and this is one of those for me.