And suddenly today, a little switch flipped and I feel better. I truly do. Maybe it WAS getting off my ass and doing something, although I certainly didn't run for president or cure cancer or feed the homeless.
But last night while I was watching Bill Clinton's speech (not his best and did you notice the tremor in his hands? is he okay?) I finished sewing buttons back onto a dress for Maggie that I think my mother made for me when I was a baby and also fixed a pair of overalls and today I took the dress, washed and ironed, over to Lily's along with some eggs and I did figure out how to get those cloth parts off the bouncy seats and washed them and took them to the place where I wanted to take them although they WERE CLOSED and there were signs everywhere that said to please not leave donations outside. I texted Hank who is a very good friend of the woman who runs the center and he told me to take the seats to another place and they would keep them for me until he picked them up tonight because he's going to be out that way doing trivia and he'll get them to the right person or...something like that.
And when I went into the little restaurant where he sent me and I introduced myself to the guy who owns the place, he was so sweet and so happy to meet Hank's mama and happy to help.
Being Hank's mama has its perks and some day I'll tell you about the time he was on Oprah.
Yep. Hank was on Oprah.
But that's not what I came here to tell you about this evening.
Besides dropping off the bouncy seats and the dress and the eggs I got my passport photo taken which was a horribly depressing experience but I got it done because if we're going to Cozumel this Christmas, our passports need renewing and also, Mr. Moon is going to Canada to hunt again this year so passport renewal is definitely in order.
And then I went to Costco and then I went to Publix and for some reason, when I got home, I felt really okay. Like...whatever, you know?
And I made a venison meatloaf with peppers and onions and Lipton's onion soup mix (go ahead and judge me- it's fucking delicious) and ketchup and portobello mushrooms and bread crumbs and an egg, and I snapped and shelled more green beans and have them cooking with tomatoes and I have potatoes baking in the oven with the meatloaf and I'm going to cut the corn off some cobs and add them to the green beans and tomatoes and it'll be a very, very fine supper.
And as depressing as the political scene is right now, I'm thinking about what's going to happen during the debates and how that has the potential to be the funniest thing I've ever seen in my life and I'm also thinking about how the Bernie supporters who won't give it up (Susan Sarandon, really?) need to remember that no politician on earth is a super hero or a god and no one is going to be able to deliver everything you want and free you from the constraints of stupid laws but "voting your conscience" means voting for Trump and there are possibly three supreme court nominees that are going to have to be made and Hillary Clinton has been in public service since she was seventeen years old and Donald Trump was almost stabbed once by Keith Richards for being a dick and there you go.

I was thinking earlier about what I would tell Sue if she were to magically appear before me and ask for an update of life here on earth since she left us and it sort of blew my mind.

Well, honey, George Harrison and David Bowie and Michael Jackson are all dead but Keith Richards is still alive and we've had our first African American president and he's been magnificent and hopefully, we're about to get our first woman president. There's this thing called the internet and we all have computers on our phones in our pockets and salads are a lot better. Turns out that the worries about the ozone were the least of our problems, environmentally speaking, and the oceans are rising and temperatures are rising and it would appear that IQ's are dropping.  Being a hippie is still a thing and gay people can be married and serve in the military. Yes. We still have a military and wars are still being fought and we haven't figured out how to beat our swords into plowshares. Pot is legal in some states and will, eventually, be legal in all of them. Abortion, although still legal, is under attack as are all of women's reproductive rights and Civil Rights are no more settled than they were when you died and women are still expected to be thin and young and beautiful. Or at least thin and beautiful. And Donald Trump- remember him? is running for president and has a good shot at it and Lord, you're lucky you've missed this pile of dog crap. We buy things with plastic cards that look like credit cards and we run them through little machines and push buttons to pay for our purchases. Cash is hardly used at all and checks? Well. Forget about it.
In my own personal life, my oldest child is a man named Hank now and Lily has three children and Jessie has one and I'd say that May is beautiful but she looks so much like me when I was her age that it would sound like vanity and she's married to a lovely man named Michael and I'm still married and in love with your Glenno and I still love Mexico and now I live in a really old house in Lloyd and have chickens. Aging is incredibly difficult and in some ways, you checked out at pretty good time but selfishly, I miss the fuck out of you. I never go out to party anymore and I look back on all of the years that you and I went out and danced on your birthday and came home on mine and I smile with nostalgia and I'm so glad we did that because my hips are so fucked up now that I can barely dance at all.
You wouldn't recognize me, Sue. But here I am. Still thinking about you, still missing you, still wishing you happy birthday.

Here's a picture of three of my grandchildren. 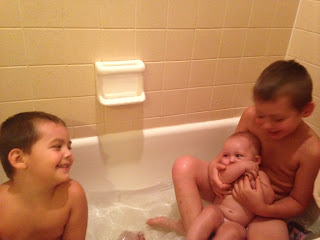 Remember when Lily, their mother was born?
Yeah. You do.
Love you, baby. So much.
Mary
Posted by Ms. Moon at 8:04 PM