Want A Little Cheese With That Whine? No Thank-You. I Would Prefer Narcotics 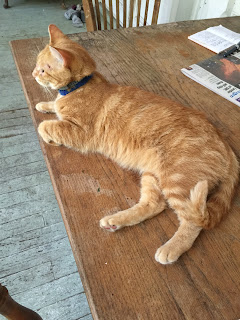 I have so much to do today that I feel paralyzed. So what have I done?
Gotten up, drunk a bunch of coffee, taken trash to the place where you take the trash, gone to the post office and sent a friend a little birthday card. Also called my neighbor to ask for the dog owner neighbor's phone number but I got her voice mail (I swear to you- I wrote "answer machine" and then realized that she has a cell phone, of course, and no machine is involved and now I think I'll go get my smoothie out of the ice box, okay?) and haven't heard back from her.

I need to do laundry, go to town and run errands, stop by Lily's and deliver presents for the children and, more importantly, kiss the children. I need to clean, or at least mop my kitchen because it's nasty, y'all. It was nasty before I left and the mop fairies didn't stop by while I was gone, it would appear.

Oh wait. She just went in to check out the food bowl.

Yeah. That would be a cat. Last night Jack slept approximately on top of me. I think he missed me. He actually purred.

Oh god. Who wants to hear about my cats? Or my errands? Or anything that a will-be-sixty-two-years-old-in-three-days-woman has to say?
Do you know why I am sitting here writing this? Because I can and because that's what I do and because I'm in despair because my birthday is coming up and although I'm writing about it, I really just want to ignore it and I've been saying I'm sixty-two for months now and so what's the point of making a deal out of it? I don't want to go out to celebrate, I don't want to stay in to celebrate, I don't want to celebrate at all.
I'm sorry. I know I should be all wise-woman-crone-birthday-girl-pink-candles-on-the-cake but fuck that shit, no, I am not.

I feel like I'm over the hill, done, washed up, ugly, old, and as useful as tits on a boar hog as they say around here sometimes. Supposedly they say that. I don't know.
I think about people older than I am who are still living vital, exciting lives and I think, Good for them.
I think about the couple who were our fearless leaders in Cuba and I think about Keith Richards and I think about a friend of mine who is about to go hike the Hight Sierra Trail for a month, and I think about, oh, everybody, and it exhausts me.

What a stupid, boring age. Who thought I'd live this long?

Well. Fuck. I have. You want to know what's depressing? Walking past vintage shops in a hip, cool town to see things hanging in the windows that are not as old as actual clothing you have hanging in your own closet. Also- taking make-up to that cool hipster town and not even unscrewing your mascara once because- who the fuck cares? Also- catching sight of yourself in the mirror and wanting to die. Also? Having to keep your chickens cooped up. Also?
Well. You get the drift. And just in case you think I'm an incredibly shallow human individual- YOU ARE RIGHT- plus the fact that there are so many truly hard and sad things going on around me that I can't even talk about.

All right. I'm going to go get dressed and get to Lily's and go from there.

Make-up will not be involved.