I Am Not A Joiner 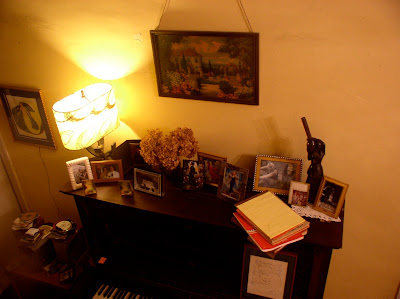 It's evening here in Lloyd and it's been a good day.

I got to hold Owen while he was in a good mood and I told him chicken stories and also a joke that Colin told us last night while we were waiting in the wings about elephants' assholes. Owen liked the chicken stories better and during one, while I was telling him how Sam is trying to KILL Miss Betty by pecking her head bloody, he cocked and arched an eyebrow and then smiled as big as the world. Ah yes. That boy.
I cannot even begin to tell you how much I love Owen, his smell, his fuzzy head in my palm, his sweetness when I change his diaper, his tiny butt, his plumping face, his bow-tied lips, his weight in my hands, his eyes on mine. No. I can't tell you because there are no words.
I not only cried when I left, I cried when I saw his papa a few minutes later in the grocery store where he works. I hugged him and said, "Thank-you so much for giving us this boy. I love you."
And then I picked up a can of Pringle's Light Chips because we were in front of the aisle where they are sold and that's life.

I went back to the Opera House after that to help clean up and collect all my stuff that we used for sound effects. The chains, the plates, the coffee cups, the martini shaker, the pool balls, the toy piano, my knitting, the cough drops, the flasks. Kathleen and Jack and I stored away tables, and mics and Caleb and Larry, our young dudes, helped us.

And then it was time to go to the annual meeting of the Opera House Stage Company of which I am a card-carrying member. Jan gave me my card today. So seriously, I am.

Now I am not a joiner. I don't get involved with anything with the name club in it. I just don't. I don't wear skirts that button down the front and I don't join clubs. But the Opera House Stage Company has no "club" in the name and it meets once a year so it's relatively safe. Or at least one would think.

I sat at a table with Larry and Caleb and Colin and Ron, our Methodist minister, and Kent, Jan's husband who isn't officially associated with the Opera House but who puts in about ten kazillion volunteer hours a year there. Wine was served but I don't drink wine. I could have gone and gotten a beer out of the refrigerator but it was too early for me. But I like the fact that wine WAS served and people were drinking it. And Kathleen had made hummus and cookies and there were chips and crackers so no one was going to starve at 3:00 on a Sunday afternoon.

Now you'd think that an Opera House Stage Company meeting would be a meeting that even I could feel comfortable at. Especially one where Kathleen is the chairman and the cookie baker and all the people I love to play with are in attendance. And I felt comfortable. For a while. There is business that must be attended to and it was.
But. But. But.
Even at the Opera House politics get involved.
You see, we have this woman there.
Okay. How do I put this?
She annoys the living fuck out of me.
Now that's a true statement but so what? Sometimes you just get annoyed by people and you don't have to like everyone.
But this woman is someone I cheerfully refer to as my mortal enemy. And the reason I refer to her that way is because of an incident where she blatantly insulted me in print and had the gall to think I would not pick up on the insult because I am southern and therefore inbred and a cousin-lovin', retarded idiot who doesn't know shit.
She is not from the south and the only reason I can imagine that she has moved to our fair county is that she is somehow involved with the witness protection program.

Okay. Okay. Let me stop right here and say that I think this woman has talents which are HUGE and she has done some amazing things at the Opera House and I especially admire her ability to work with children. And that is the truth. She's got what it takes to do what it takes to put on a production and to deal with children and to dream big and make it happen. She works herself to the bone making it happen.
Honestly. She does.

All right. Having said all of that, I have to say that I am now so prejudiced against her that if she came up with the best idea ever in the entire universe I would vote against it. And I admit that I'm completely wrong and idiotic (although not inbred, I assure you!) when I say that.

And this leads me to the point of my discussion- I should not go to meetings. When she started talking this afternoon about her ideas, I got anxiety. She talks really fast and doesn't take a breath and she's sitting there with her table of supporters and I don't know- I just freak out.

I'm sort of freaking out just thinking about it.

So anyway, the meeting ended and I came home and buried a dead squirrel that my semi-feral cats had killed and eaten the head off of and I did the chicken shuffle and collected a few more eggs and put Miss Betty back in the coop and let the others come in for the night and picked arugula for the salad I plan to make tonight and put away all my sound effects stuff and washed the dishes and now I feel okay. I realize I would much rather bury a decapitated squirrel than attend a meeting- even a meeting made up of at least 60% of people I love.

I used to feel guilty because I didn't want to be the damn secretary of the PTA. I don't anymore. I realize that people who do those sorts of things may bitch about it, but they love doing it or they wouldn't be there doing it.

Me? I just want to show up and audition for plays and help clean up after the production is over and help in the kitchen for dinner performances I'm not in and then come home and wash the dishes and go out to the garden and water my porch plants and then take pictures of my piano from the stairway and have time to go to town and hold my grandson's head in my hand and tell him stories about chickens.

And I'm fifty-five years old and I know that that's okay. I don't want to run the world or a company or even a meeting. Maybe especially not a meeting.

I just want to love the people I love and cook a supper and sit on the porch and once in a while, get up on a stage and be someone I'm not.

But I have to say that I was a tiny bit Schadenfreuded when that woman did not get elected to a seat on the board.
And boy, do I feel guilty about that?

I just hope I don't get sued for slander for writing this.
And I hope that I've not become one of those old people who can't stand change.

I told Ron tonight that I have my own church now- the Church of the Batshit Crazy. He seemed to approve of that and wanted (as any good pastor would) to know how big my congregation was. I told him I had no idea. Larry and Caleb wanted to know what our rituals were. I said, "Oh, you know- eating, sleeping. Collecting the eggs. Whatever it is that people do."

I'll tell you this though- we don't have meetings.

And Kathleen- those cookies were awesome. Thanks. I wish I had some for my dessert tonight. And I am in complete awe of the way you can run a meeting. Someone has to be good at these things and you certainly are.

I'm not and I know it. But I promise you that next year, I will make the cookies.
Posted by Ms. Moon at 6:11 PM