The setting sun has laid a pink stripe across the sky as if a giant child had dipped her hand in paint and swiped it across the darkening gray. It's very quiet in Lloyd tonight, I hear only traffic now and then and the lonely cry of some bird, settling into its roost.

The temperature is dropping and I have my space heaters and gas logs at the ready. I've covered up my porch plants and have brought a few inside but I'm worried that the wrapped ones may not survive tonight's light freeze and then two nights down into the twenties. The camellias which are already open will be frozen for sure but the buds will be fine, I think.
And I have discovered over the years that many of my potted plants may look dead after such weather but if I cut them back and am patient, they may well shoot forth green growth again in the spring.

This morning when it was still warmish, Jessie brought the boys over and I made pancakes and we read books and August got to watch some TV. Vergil and Glen left early for the island and we women are workin'-man widows tonight. I just got a text saying that they've gotten power to the pump and are trying to prime it right now. Getting water back on is a major priority, of course. We don't drink that water but we use to wash dishes and our bodies and hands. And to flush the toilet with. Running water if a mighty fine thing, isn't it?

Both of the boys were wearing overalls when they got here. August was wearing the old green ones that had belonged to May when she was a little girl that I have been decorating in my hippie, funky fashion. 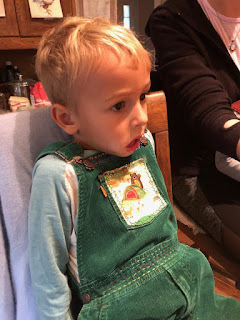 I love doing that so much. It's such a simple and fun thing to do. I almost feel like a child with the absolute freedom of choosing stitches and colors and beads. But a child who gets to use a needle and sharp scissors.

Here's Levon wearing his undecorated overalls riding the horse in the library. 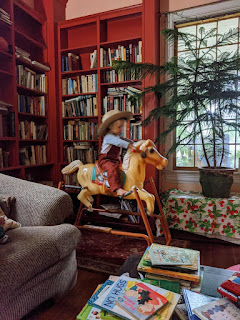 As you can see, my Christmas tree is still inside but that turns out to be a good thing.
The pink pants I made for Levon just did not do. The pattern called for a knit- something that would stretch- and I, in my usual slap-dash fashion thought I could adapt it for a non-stretchy fabric and it turned out that no, I could not.
Or at least I did not.
But I so wanted to make him a pair of pants so I rustled around in the fabric dresser and found some old cloth that I had used in a quilt sometime back that is as nubby as a chenille bedspread and so soft that you know it's made out of a not-found-in-nature material but Levon said he liked it okay despite the fact that it was green, not pink, and like I said- nubby.
So here he is in his bedspread pants. 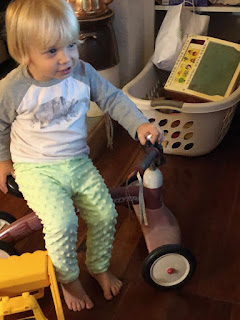 They're either the tackiest thing I've ever seen or the cutest. I'm not sure which. But I managed to whip them up in about forty-five minutes. I'll tell you the truth- I couldn't make a pair of pants without a pattern if my life depended on it but with a pattern for kid pants, it's the simplest thing in the world to do. I am not a natural seamstress in the least. I need a pattern. Luckily, they still make them.

After Jessie and the boys left I felt not really sad and not really lonely but definitely glad that I'd had such cheerful visitors for part of the day. One of the books that August really wanted me to read was The Jolly Christmas Postman. He claims that this is his favorite book ever in his life. Of course I read it to him and it's full of really bad jokes and when I say bad I mean just completely silly but they make him laugh and he always says, "That's a good one!" which makes me laugh. Often Levon will repeat, "That's a good one!" after his brother says it and then he laughs too although I am sure that he has no clue as to the supposed humor to be found.
Anyway, I tidied up a bit and did some laundry and then I ironed the flannel I bought to make my dress and I laid it all out and pinned the pattern pieces on and cut it out. I ran a bobbin of the thread I'll be using and now everything is ready for me to start sewing. I was thinking I'd do that tomorrow, shutting myself into the dining room where I have my sewing machine set up and which has one of the gas log fireplaces in it but Lily has texted to see if we all want to go to the Jr. Museum, braving the cold.
That could be fun too.

Meanwhile I just have to finish up this Sunday, put it in an envelope and slide it under the boss's door, clock out and go to bed.
I sure hope Jack wants to sleep with me tonight. I'm going to need all the warmth I can get and he's a comfort, for sure.

Here's a picture I just got from Dog Island. 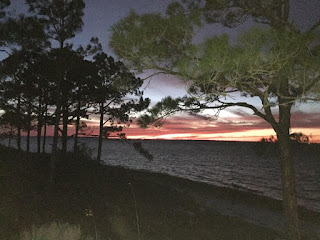