A Parting Of The Veil Day 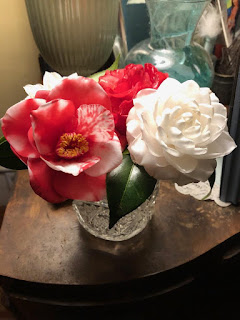 Today was as blue and crisp as line-dried Levi's, cloudless as a baby's eyes. I did in fact hang the clothes on the line and why that makes me feel so good is beyond me but it does. There's just something so perfect about it in design and effort. And it's ridiculously pretty to me to see those towels and napkins and dishcloths and shirts and underwear and yes, jeans, fluttering in the sweet cool breeze. There's something so infinitely cleansing in the drying of laundry on the line which is far superior to what happens in the dryer.
Or at least in my very simple and simply pleased mind.

So yes, today was a better day and I've found that when I've been through a spate of sadness and anxiety which suddenly ease their hold on me that it's so much a release and a relief that there's almost a giddiness to my soul. Once again the smallest things make me happy and I wonder why in the world it's ever so damn hard for me to enjoy the small but bounty-full life I lead. I started making a black bean soup early this morning and that gave me pleasure. The laundry on the line gave me pleasure.
My camellias gave me pleasure.
The red and white ones are called "La Peppermint" and the white ones are called "Seafoam."
How perfect are those names?

I had to go to town to get some groceries and I met Lily and Lauren and Magnolia June for lunch. I got a salad bar salad and then finished up Maggie's macaroni and cheese because it was the most delicious macaroni and cheese I'd ever tasted, like Blue Box Kraft only even cheesier and more sinful and I enjoyed every molecule without guilt. Maggie and I were wearing practically matching dresses which was funny and the shirt Lily was wearing was the same color. I helped my granddaughter get her soft-serve ice cream cone and she was happy about that. She got bored before we were finished and did some child yoga on the bench seat we were sharing which was entirely inappropriate and also hysterical. After lunch I stopped at Walmart which I almost never frequent but I wanted a new crochet hook and didn't want to drive all the way across town to get one. I went to Publix and got everything I needed and didn't run into anyone I didn't want to speak to which is always a huge bonus. In fact, I didn't run into anyone I knew at all.
I'm not much of an extravert these days.

I got home and got the clothes off the line and folded them and put them away, heated the bean soup back to simmer, unloaded the dishwasher, picked fresh camellias, swept the kitchen, made pickled onions to go on the soup, cleaned out the chicken nests, put the poopy hay around the rose that Ellen sent me, sat and crocheted for a few minutes and watched another episode of Schitt's Creek.
Mr. Moon and our friend Tom are watching a basketball game which Tom can't get on his TV and I'm about to serve them some soup with chopped cilantro, sour cream, avocados, and the pickled onions.

You could pierce your ear with the moon night, it's that sharp and thin.

There is so much wrong in the world right now but for today, at least, I can find joy in that which is right.

May all be well or well enough, at least, with you.