My Usual Blah-Blah Plus Observations On Cooking Collard Greens 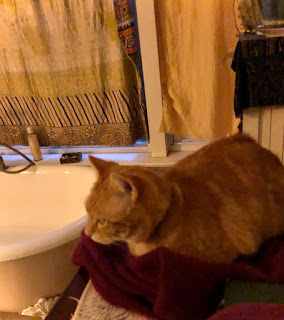 The cats aren't quite sure where to be or what to do right now. Mr. Moon has made the decision that Jack can no longer sleep with us. He okayed that decision with me and although it sort of hurts my heart, I understand. Jack, after cuddling my hip for part of the night likes to walk over and lay down on Mr. Moon's feet. This is not really something Mr. Moon enjoys but the problem comes when he tries to turn over or shift his feet at which point Jack goes a little crazy trying to kill the bed mice, and then cursing and a cat being helped to the floor often follows.
The other day Mr. Moon was talking to me about this- how much it disturbs his sleep.
"I know you love him," he said. I thought about that for a moment because it is a pleasure for me to have Jack sleep with me and he does a terrific job of keeping the covers pinned down with his warm, soft bulk. And then I quit thinking and said, "I do love him. But I love you more."
"Phew!" said Mr. Moon.
And so we've shut the door on Jack and I don't know where he's sleeping but Maurice has found a spot she likes in my bathroom which is the farthest-away room from the rest of the house and of course she wants to make her bed on a Goodwill cashmere sweater. Since Jack can't possibly be as far away from the food dish as my bathroom, she is relatively safe from his attacks there and of course, cozy.

I woke up this morning to find my husband back in bed after his drive to the airport and back way before dawn. I was so glad to find him there as I'd been having one of those horrible dreams in which he is indifferent to me. You'd think after thirty-six years of life together that I'd be less apt to have these dreams, wouldn't you? But I swear to you that in my dreaming world he has a girlfriend and they have a child. I've seen pictures. IN MY DREAMING WORLD. Not unlike dreaming of a certain place over and over again, I dream about this fictional woman. She has dark hair. She works in the automotive world. She is disdainful of me. I hate her.
Which is a lot of energy to expend on someone who does not exist. Mr. Moon, when I tell him about these dreams says, "That hurts me, that you would have a dream like that. I love you."
And I know he does but let's face it- when your very own father is someone that you do not see after the age of five it's hard not to believe deep down in your soul somewhere in the funkiest, darkest place that you are not deserving of love.
This is of course ridiculous. My father didn't see me after the age of five (until I was thirty and that's a whole other story) because he was a drunk and was probably horribly ashamed and also, my mother did everything in her power to protect my brother and me from him and she had good reason to.
But this is all very hard for a little girl to understand and these things were never really discussed. Even at that tender age I knew that talking about my father was horribly painful for my mother and I didn't want to upset her. And of course the general school of thought then on things like this was that if you just don't talk about any of it, the child will eventually get over it and forget.
Which is the exact opposite of what really happens but who knew that in 1959? I doubt there was any sort of counselor or psychiatrist or psychologist in all of Indian River County at that point in time.
Well.
This is one of my own explanations of why it is so difficult for me to accept the love of a good man, even after having been with him for over half my life.
So back to this morning- it was sweet to find this man sleeping beside me.
A good way to start a new year, even with the dream.

After I made breakfast I started the collard greens. 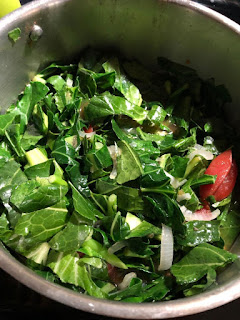 And then, the black-eyed peas and ham bone. The greens are still simmering although the peas were done way before now and I let them sit. I've now added the rice to them and turned them back on. Black-eyed peas and rice are what we call Hopping John. Again. No idea why. I could easily google it but frankly, I'm not that curious. It just is.

I cheated and bought grocery store collards because mine are still only big enough for baby green salads and I didn't feel like going to Monticello to the farmers' market to buy decent ones. They'll be good enough. I have to tell you though that I was quite taken aback to read this recipe on the back of the package. 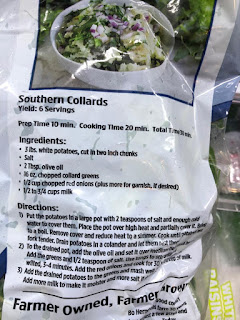 This recipe is absolutely horrifying. First, I have never in my life met a southerner who combined collards and potatoes. Add in the milk and you've got a true gag fest going on. And the directions to cook the greens for four and a half minutes?
Bite my southern ass.
Collards are lovingly simmered for hours. Days. They are the queen greens and they do not break down like your spinach, your mustards, your turnips or your kale. They do not become mushy. They become more and more tender so that they are bitable and delicious. YOU CANNOT CREATE POT LIQUOR IN FOUR MINUTES!
Well, okay. Enough of that. Next year I really have to plant my greens earlier.

I am also going to try something completely new for me which is sourdough cornbread. There are actual recipes for this which I have perused today. What happened was that I needed to feed my starter and when you do that, you have to dump out a cup of the starter before you add in the fresh flour and water. I hate throwing out that cup of starter and therefore...
It might be disgusting. It might be awesome. Whatever, with a bit of cane syrup and butter on it it won't suck. I hope.

Besides the cooking stuff today I worked in the garden. I planted a row of beets. Finally. And planted a few more lettuce seeds and kale seeds and a whole other row of arugula. My poor garden looks bonsai. I just do not get enough sun.
We struggle on and today it did feel good to get down in the dirt.
I also did a bit of trimming back of dead stuff and cut back a few roses. Despite the fact that we got a light freeze recently, the roses seem undaunted but I know they need pruning. 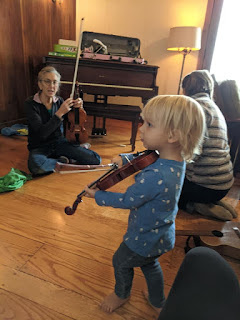 This little boy and his brother and mama and daddy are heading home tomorrow. Jessie reports that she feels MUCH better and is so grateful that Penicillin still works for strep. I will be glad to see them but I am also so grateful that August and Levon have a mountain family with a grandmother who is a musician. I can teach them to curse. Other Grandmother can teach them violin.

So. 2020 has begun. I know that the way we keep time is simply an artifical construct but still, I feel some possibility in the so-called new year.