I'm Just Doing What I Can 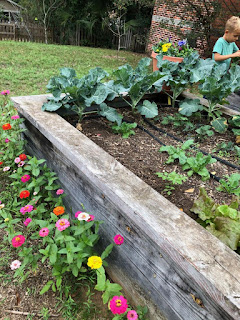 The day has been so gloomy here and humid as hell. Warm, too. A pregnancy of the air, heavy and cumbersome with rain yet unborn. But look- there's one of Jessie's raised beds and you can see the volunteer zinnias, still blooming their pretty little heads off on January 3. Tenacious little fuckers.

I raced around here this morning, getting things done before I went into town to see Jessie and the boys. I put white beans to soak and started a sourdough loaf. I stripped the bed and began the laundry process. Let the chickens out, tidied up the kitchen, got dressed, went to town.
I was so happy to see the Weatherfords. Jessie claims she feels so much better but she is pale and wan. She says that really, it was a nice vacation, despite being sick. Vergil wasn't working at all so he took the boys with him to do work on their future home spot and to visit with his family. Jessie got to hang out with the family too, as much as she could, and she loved that.
When I walked in their door, August began to tell me that he was sick and he listed all of his symptoms and he said, "I have a fever," and he was eating a frozen yogurt pop and was shivering and Jessie was in the background, shaking her head. He hadn't been running a fever just a little while before and had been acting fine until I got there and he decided to unload his woes, whether real or imaginary. And then he immediately went and got a book for me to read and Levon got one too and we read books for awhile so Mama could take a shower.
Of course it was not unreasonable to believe that August could be getting sick. His mother had strep so...
We know how that goes through a family.
We decided to go to lunch and meet Boppy and before we went Jessie took his temperature again and it was 91.1.
Well. There you go.
We did have lunch and August ate a normal amount and seemed to be in a good mood and Levon was in a good mood although all he wanted was bread but that's not weird.
Here they are, my boys. 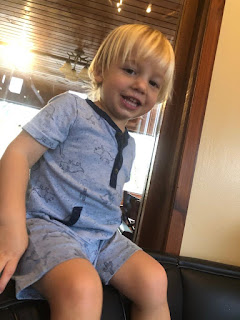 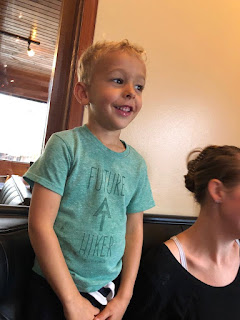 Jessie called the doctor's office as soon as they reopened after lunch and made an appointment to take them in and when we all left the restaurant, they headed off in that direction. I went to Goodwill. Don't ask me why.
I actually bought things today. I got two nice cotton sweaters (there was NO cashmere) and two shirts. I have no idea if I'll ever wear the shirts. One I just couldn't leave behind. It's a cotton/silk blend, blue with white fishes swimming and flying all over it. 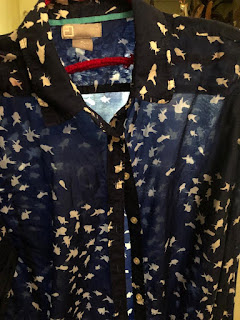 I went to Publix and while I was there Jessie texted to say that August had indeed tested positive for strep, but not Levon.
It may be only a matter of time or he may not get it. Supposedly the test shows positive before the symptoms begin so we shall see. I'm glad that Jessie caught it early. At least August won't have to go through the agony of being truly sick with that particular nasty bacteria.

I came home and did more laundry and made up the bed with clean sheets. I decided against making the white bean chili I had thought to make this morning when I soaked the beans. Our lunch was substantial and I'll just make us some clam spaghetti. The sourdough loaf is in the oven. It rose like Jesus on the third day. The chickens are up, my man is home having accomplished more in one day than I'll probably get done this entire year.
I told him about August. He said, "I'm glad I didn't kiss him."
I did kiss him but not on the lips. He'd never allow that. At lunch I asked Levon if he'd like to sit on my lap.
"No," he said and I said, "Okay," and then he came and sat on my lap.
I felt like the queen had just made me a dame or whatever the title is that queens bestow on ladies.

I hear that Trump has, well, I don't want to talk about it. I really just don't. I can't do a damn thing about what may or may not be about to happen. Instead I'll tell you how I make clam spaghetti.

Buy two cans of minced clams. Open them.
Splash a little oil or butter into a nice, heavy pan or skillet. Heat the oil but not too much. Slice up onions and add them to the oil. Smash or mince or smush some garlic and add that too. When the onions are soft and before the garlic burns, add the clams with their juice. Add some salt and pepper and a pinch or two of oregano. Or Italian seasoning. Whatever. Turn the heat way down and put a lid on the pan or pot. Let it heat through nicely.
Boil a pot of water and cook some pasta. Mr. Moon likes angel hair. That's fine with me but your choice.
When the pasta's done, drain and put some in a bowl and dip clam sauce onto it. Sprinkle some grated parmesan on it if you want.
Serve.

It's supposed to rain tonight. And then get cold. Our heater is well and truly now busted. We have gas logs. I have cashmere. We'll survive. Jessie's zinnias probably will too.