Love The One You're With

My old man's got way too much on his plate right now. Some of it business, some of it not. Quite frankly, I'm not sure how he holds everything together. And he puts his heart into everything so that nothing he does is by rote or without thought.
The other day I was looking at him and it struck me so damn hard how lucky we are. So very few people make it to a long marriage and that's okay but there's something to be said for having a companion for twenty, thirty or more years. There's a tenderness that can grow after the younger, sometimes more turbulent years. A respect develops, for certain. A deep wonder when something new is revealed about someone you've loved for decades. The fear of losing someone to another person or of them simply falling out of love with you is replaced by the the sure knowledge that one of you will go before the other which makes the time go way too swiftly, which makes the heart fill far more frequently when you ponder what that person means to you and how much of your life is consumed and defined by the fact that you spend it with him. Or her.

When you have a child you have an immediate and overwhelming sense of the need to protect that baby, to keep it alive and as healthy and robust as possible. When you're in love with someone for many years into older age, that same sense of wanting to protect and ensure the safety of your love becomes more and more intense as time goes by.
Well, at least this is true for me.
And when things are hard for your love, you ache for them. You want to smooth it away. You want them to be...happy.

I guess that's as good a definition of love as any.

And Mr. Moon will be fine. He and Vergil are heading back over to the island tomorrow. They're going to spend the night so they're packing food and provisions as if they were going to be camping which in a way, they will be. I'm glad they're going. On Dog Island there is not much you can do about the world beyond that beautiful bay. It's over there, you're on the island and you are forced by circumstance to be more mindful of exactly what is in front of you, whatever it is you're dealing with. That will be good for him.

Meanwhile today I worked outside some, pruning my roses probably at the exact wrong time but as I told my husband, I have no idea what I'm doing but whatever I do the roses never seem to die so who cares? I also kneeled in the dirt and did some weeding and the weeding I did under one of those roses led to an epiphany. There's a sort of stinging nettle plant that grows in the yard and is profuse under that rose. I hate it. Even when I wear gloves and long pants, it can somehow make its way through to my skin and after the original lit-on-fire feeling, it itches and burns and now this evening even hours after exposure, one of my knees is buzzing with it. For a long time last year I had a horrible pain in that same knee when I'd put weight on it and now I'm wondering if that nettle isn't like the red coral I inadvertently sat on once while putting on my fins in Cozumel and which itched and tormented me for a good six months. Could the microscopic toxic hairs of the nettle plant stay underneath the skin for that long?
Who knows?
I've googled this horror of a plant and I believe it's name is Urtica Chamaedryoides. Also known as "Fireweed" which is just about right.
Funny that I described the initial sting as feeling like being "lit on fire".

I started and almost finished a pair of pants for Levon. Jessie told me yesterday that it's a fight every day when he gets dressed because he wants to wear a certain pair of pink pajama pants but they're shorts. Which is fine in summer but it's about to get cold again. So I got out an old pattern of Maggie's and whipped up a pair of dark pink flannel pants. I hope they fit him. I hope he likes them enough to wear them because they will keep his little legs warm.
I'll finish them when I have the actual boy around to make sure the elastic in the waist is the right length and to see how long to hem the legs.

Some camellias I picked today. 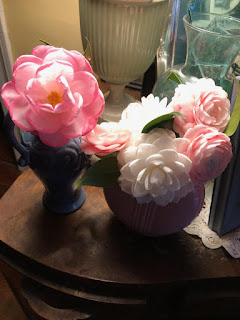 I have identified that camellia on the left which I love so much as a Dr. Tinsely variety. A rather pragmatic name for such an ethereal flower. 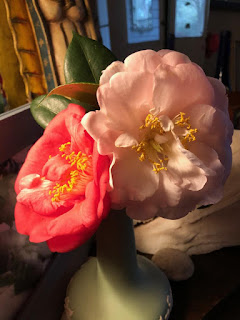 I don't know the names of these but they are quite large and have bigger leaves. Each of the blossoms is heavy and dense, despite their delicate appearance.

These are my musings tonight.