Mr. Cracky Is In The House 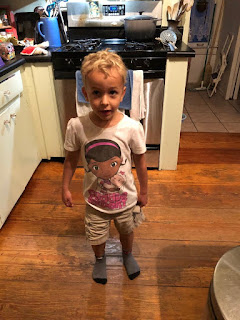 It's been a wind-chiming day around here today. The belt of weather that's affecting so much of the country has given us a little taste of its power. So far- just a taste and that is fine with me. We had some strong gusts this morning. As I sat on the porch I heard that sound that I've come to know so well- a slow, ripping and splitting of something huge but no crash followed so whatever broke away from its trunk must be propped up on branches to prevent its fall. I went out and looked around but didn't see anything.

Mr. Moon took off early this morning to go help a friend down at the coast build...something? A boathouse? A shed? A shed for a boat? I don't know. I should know but I don't. I did receive pictures but it's still in the framing stage of construction. I hung out here and got a few things done and made a quick run to the nearest Publix where I bought necessities (beer and bananas, etc.) and then took a nap. I knew that August was coming out and I decided to put my free time to good use.
Haha.
No. Seriously.

Jessie's best friend from middle-school on is in town and the two of them have taken off to Thomasville, Georgia for a quick girl getaway and boy, does Jessie deserve it. As Vergil said, when those two girls are together, there's a lot of giggling going on. Melissa is Jessie's BFF and that's all there is to it. They played in the same bands together, she and her former boyfriend lived with Jessie and Vergil for awhile, and I think they'll always be close. Melissa has an exciting life now though, and lives overseas doing environmental work. She's pretty amazing, that one. I love her like one of my own. Anyway, Vergil took both his boys to Torreya State Park today to do some hiking and he reported that August walked over three miles on those skinny little boy legs and that even Levon walked a good part of it. Gotta keep those mountain muscles strong! Torreya is an amazing place but has not begun to recover from Hurricane Michael. August showed me with his hand how tilted all the trees are and there is only a small bit of the trail system open.
But after that and a nap for the boys, they came out here and as August said, he is going to have an over-sleep here. Before Boppy got home he and I got the broth and vegetables and chicken ready to put dumplings in and then we read some books. We made up his bed in our room with a sheet and a cozy blanket and a pillow, all ready for him to sleep on. He's so happy to be here.
When Boppy got home and was taking his shower, August and I went to shut the chickens up and let me say this- do not ever let anyone tell you that chickens are stupid.
They are not.
We're down to seven birds now, including Liberace the rooster and lately, three of the seven have been roosting in the tree right beside the hen house rather than inside of it but tonight, they are all seven snug inside. This wind definitely made them leery of a night outside perching on swaying branches. I was so glad to see them all there.
As I've been writing this, I've been hearing great rollicking peals of laughter from the Glen Den. I just went in to check to find this. 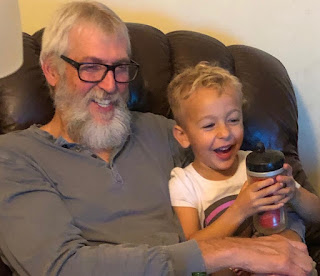 They are watching Tom and Jerry and August is incredibly entertained by the antics.

Here are what my pink perfections look like today. 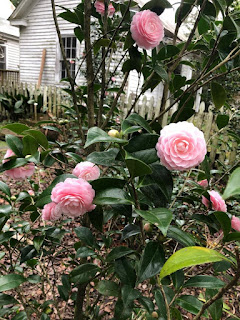 I better go make dumplings and add them to the pot so that we can eat supper before the young Mister falls asleep.
I can still hear him laughing.