Spend The Night Time Is Here 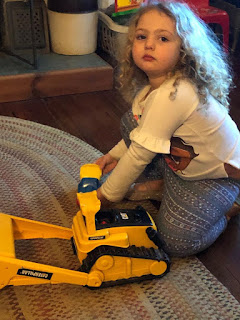 The gang is all here, the pizza dough is rising.
Owen wants bacon and pepperoni, Gibson wants cheese and Maggie wants olives. Boppy likes ham and black olives and pineapple.
Mer likes whatever is left but I did get some spinach to put on one.
I have stocked up on lime sherbet, grape juice and ginger ale for the traditional spend-the-night dessert we call a Purple Cow. It's sort of like Methodist Punch but we don't serve it in a punch bowl although WE COULD!

We haven't quite figured out the sleeping arrangements. Maggie, not unlike her mother when she was a small child, doesn't like to go to sleep until well into the night and the last time she stayed here she ended up sleeping with Owen and Gibson in their bed which led to Owen saying the next morning, "I didn't sleep LIKE a baby, I slept ON a baby."
I know she really wants to sleep with me but there is no bed in the world big enough for Magnolia, Boppy, and Mer. She's made out of velcro when it comes to sleeping and I'm just too old to be clung to throughout an entire night. Yes, it sounds delightful but trust me- it's not so much.
Perhaps one of the boys will sleep on the fold out bed that August sleeps on and Maggie can sleep on the big bed with one of her brothers.

I did take a nap today and I feel certain I'll be taking one tomorrow too.

It's almost dark and the birds are tweeting themselves to sleep. This morning a giant Pileated Woodpecker was looking for his breakfast in one of the Bradford pears outside the porch. He was glorious but I could not get a picture without disturbing him into flight. The camellias seem undaunted by our recent weather. 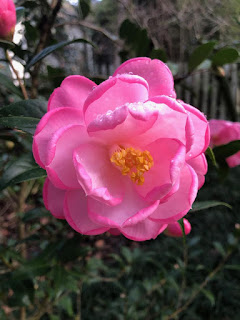 Miss Curly Pie wants to have a conversation with me so I suppose I better go.

I wish all of us sweet dreams and peaceful sleep.