Pain. What On Earth's It Good For? 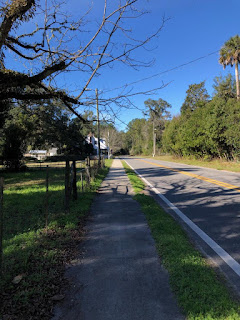 It was another gorgeous day here today, absolutely clear-blue and cold this morning. I have to admit that I am getting over the romance of heating with gas log fires for the simple reason that they are not getting the job done as to my specifications. I am wondering if my husband is going to research units until it's too warm to worry about it. For another year, of course.
I really don't think that's his plan but I can see it happening. Knowing him as I do I wonder at the fact that he asked me to marry him as quickly after we got together as he did.
"Act in haste, regret in leisure" is his motto, if he does have one.
I hope he hasn't been regretting in leisure for the past 35 years.

Anyway, nothing like a walk to warm a soul up and I took one. I came home and did some housewifey stuff and ate my lunch and read an article in the New Yorker.  (Link) 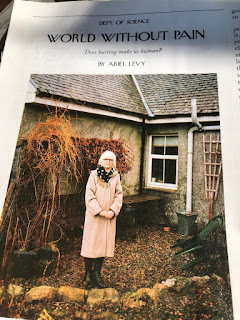 It sort of blew my mind. We've all heard of people who can't feel physical pain, which is definitely not a good thing in that the people who have this difference do things like cut themselves, burn themselves, break bones, drink scalding liquids, etc., etc., much to their detriment.
And the woman in this article does not feel pain. She can feel pressure but not pain but she's managed to live a fairly normal life and has raised two children so she's okay there. But the thing that really interests scientists and was so fascinating to me is that she doesn't really feel emotional pain either. She can feel concern and she can feel distress or a sense of urgency in an emergency but for the most part, she does not have the flight-or-fight reaction to situations that most of us still experience even though in our world, our lives, they are no longer appropriate for the most part and can cause us actual physical harm. This is not to say that she couldn't logically figure out that she's in danger and do something about it. She very much could and has. It's just that her blood pressure doesn't shoot up and her body flood with adrenalin if she gets stuck in traffic.
And according to all who know her and have met her, she's gregarious, caring, and just a damn nice person.
There was so much to this article. It starts out with the way we view pain as something which makes us stronger and more empathetic and which has purpose and meaning in the lives of humans, but it ends up making us wonder if that's just bullshit.
Which I've always believed. "God never gives us more than we can bear," for example. In truth, humans are often given more than we can bear and it doesn't actually make us better people. Sometimes it kills us.
Anyway, it was a fascinating article and in studying her, scientists and doctors may learn a great deal about pain and how to control it in completely different ways than we've been going at it. Could this also lead to help for people who suffer emotional pain?
I think it may. I've already thought about it in relation to things that have arisen in my day which were causing me to stress out and it's given me a different perspective.
Anyway, read it if you get the chance.

I drove to Monticello to return some library books and it was nice to see Mr. Terez. I've become his friend on Facebook and that's given me a whole other community to learn about. He's such a nice guy. He came over to me as I was perusing books and gave me a hug. He gives the politest hugs in the world but you can still feel the sweetness. I love watching the way he treats everyone in the library with respect and friendliness. While I was there I found and checked out this book. 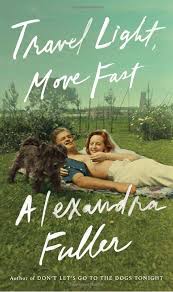 If you've never read any of Alexandra Fuller's books, it might be time to remedy that situation. Her first book, Don't Let's Go To The Dogs Tonight is devastatingly hard and sad and wonderful and beautiful. I'll just leave it at that.

I finished Maggie's dress this evening. Well, except for any fancifying I might want to do. It went easy and I think it's pretty. 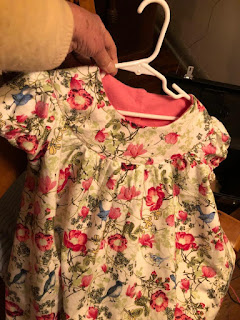 It's actually a variation of the pattern of the nightgown I made her. I hope she likes it.

Mr. Moon is at a basketball game of Owen's and then he's going to watch the FSU basketball game which is an away game on TV with friends at a little pub-like place so I'm on my own tonight. I'm going to heat up some leftovers and maybe do a little embroidering on the dress. It's going to be cold again tonight and then we should see some warmer temperatures. And I'll probably be bitching about that.
I'll try not to.