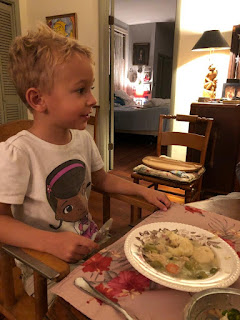 That was August last night about to dig into his chicken and dumplings. He ate a good amount and then it was bath time which he wanted (surprise, surprise) his Boppy to supervise and then it was bedtime which is when Mer steps in. He was so tired. He even told me he was tired so we agreed on just one book and it was a short one. Then he got got down on his bed and we went through the covering routine and he had Zippy, the very old chimp and the tiny sock monkey that Lily made me when she was a child. They sit up on the mantel of my room, my household gods. First August had to ask a million questions about Zippy. What did it say on his shirt? Why did he have all those buttons on his overalls? Why was he so old? When we had exhausted that subject he moved on to the little sock monkey.
"How old was Lily when she made this?"
Of course I don't remember but I said, "Maybe ten. Or eleven or twelve. Like Owen's age."
"How did she make it?"
"With a needle and thread."
"Was she all alone when she made it?"
"Yes."
"What if she got lonely while she was making it?"
"Well, you don't really get lonely when you're doing something you like doing."
"What if she got scared while she was making it?"
"She could have come to me and we could have talked about what she was scared of. Are you feeling scared?"
And then with great bravado he said, "Not a BIT!"
He may have been a little concerned about not being at home but mostly I think he was just stalling for time by this point. He pointed out that he didn't want to fall into the fireplace (his bed is on the floor between our bed and the fireplace which was not on) and so I put a screen in front of it. Then he didn't want to fall onto the screen so we moved his bed closer to our bed meaning it was practically touching it. Then he asked what would happen if he needed us and tried to wake us up but he couldn't? I told him that we WOULD wake up but as an added bit of security, showed him how he could poke me with his finger if I didn't. Then he demonstrated that he couldn't climb into our bed if he needed to which was a complete farce because as we all know, that kid could climb the refrigerator if he wanted something on the top of it. So I offered to scratch his back and he said yes, and I gently scratched his tender little back, my fingers barely tracing his soft skin. He finally asked about thunder, what should he do if thunder woke him up and I told him that we would be right there and finally he went to sleep and it did thunder and he didn't wake up.
Until 7:30 this morning at which point his grandfather got up with him and I went back to sleep until almost nine which made me feel like a horrible grandmother but bizarrely no one had died of starvation and I made sourdough pancakes and bacon and that child ate FOUR pancakes.

He and Boppy played Battle after breakfast, his first time, and he caught on quickly although he's still learning his numbers. I learned my numbers from my grandmother playing cards with me and I still remember that even though it was about four thousand years ago. We worked in coloring books and did a puzzle and other fun things and then Daddy came to get him.
"Want to go home and see your mama?" Vergil asked him.
"Yes," he said, and toting his backpack off he went.
Such a good little man.

The thought struck me last night that although "they" say that grandchildren will keep you young, I beg to disagree. I never, ever think about death as much as I do when I'm with my grandchildren. Not in a morbid way but just a matter-of-fact, inevitable way. I am not going to be around to see these children all grow up, graduate from college, discover exactly who they are, fall in love, have babies of their own. Even if I live another twenty years, which is of course possible, I'm simply not going to be able to get through their journey with them. Of course not.
That's just the way it is and I don't want to live to be a hundred and something, propped up at some nursing home tied into a wheelchair with a cake that I do not understand the meaning of in front of me.
But I can't help but think about it. How they will have their own lives that I am no longer a part of except for whatever memories they hold of me. And if that's selfish thinking, well, I'm guilty of it.
But part of it is not so much selfish as narcissistic- what will they do without me and their grandfather? We are a part of their lives that's mostly just love. We're not responsible for their discipline or education, we don't have to make the hard decisions about any of their rearing. We can respond with our thoughts if asked, but they all have wonderful parents who do and will do the hard work.
We're basically just here to love and appreciate them, to think they're marvelous and to tell them that.
I really want to make sure that they have enough years of us to incorporate all of that into their very souls.

Today, when August was playing cards with his grandfather, I told him, "August, I love your beautiful hands." I always have. 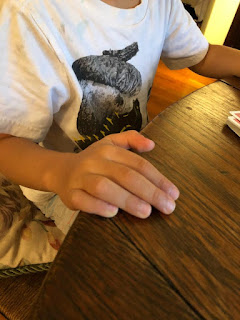 And because I'm his grandmother, I can tell him that easily. His grandfather gave a bit of a snort-chuckle because that's not something he would ever say to anyone, probably, but he tells our grandchildren how much he loves them in other ways. Grandfather ways.
And here's another thing- I don't want them to be sad when we die. They all seem to be quite aware that we are older than their parents and will die at some point in the if not-near future, the sooner-rather-than-later future. I want them to be just be happy that we were here.
And know, without one doubt, that we loved them unconditionally.

Well, that was a bit of a Sunday night musing.

I picked our salad from the garden tonight. 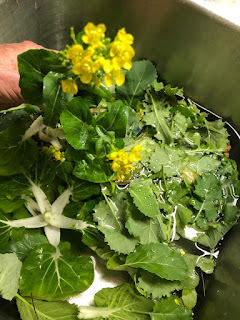 The Bok Choy, which I can only describe as minuscule, has already bolted.
And it's January.