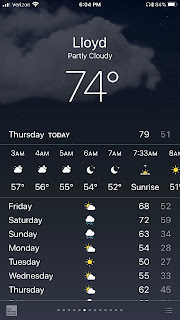 So a new heater is ordered. It should be in and installed by...(now's a good time to look at that forecast)... Monday maybe or more likely Tuesday.
Wouldn't you know it. If this forecast is correct we'll be having the lowest temperatures we've had in at least a couple of years on Monday and Tuesday!
Of course.
Well, what are you going to do? Won't it be swell when we have a new unit and I won't have to bitch about being afraid of dying from either sweltering heat or freezing cold?
What will I ever find to talk about?
I'm sure I'll find something.

From what I can ascertain via the news, at least two new things have come to light that could be grounds for at least one more impeachment. I'm sure you've heard about these things. Will it matter? I doubt it. Look- I don't even understand how this impeachment trial works but with Mitch McConnell in charge I don't think there's going to be much fairness or justice involved.
And so The Orange Intestinal Blockage will remain in office and I have to tell you that I have absolutely no confidence that he will get voted out of office this year between the racist idiots whom I had no idea lived in such numbers among us and the fact that Putin really enjoys having his hand up the Treasonous One's ass.

Had so much on my mind today that I was capable of nothing but the basics. I took a walk, I cleaned out the poop in the hen house. I picked up downed branches. I watered the porch plants. I did laundry. I actually for the first time ever cleaned the outside of the garbage can in the kitchen. I ironed and ironed and ironed.
Hey! The new (last) season of Grace and Frankie is streaming now!
I know! So exciting.
(Eye roll.) (Sort of.) (It's the little things.) (How can two women over the age of eighty not have a wrinkle between them?) (Don't answer that. I know.)

I've made up a pan of chicken enchiladas which are ready to go in the oven. I've stayed upright today although the gravity of earth and everything else kept trying to pull me down. I guess that's something to be proud of.

It's raining. A little bit. It's still warm. It's going to be cold. I need a new project.
Maybe I'll go to Joanne's tomorrow and buy a pattern and some cloth. I think I'm going to start saying "cloth" instead of "fabric." It sounds more honest.
We wear clothing, not fabricking.