In Which The F-Word Is Used Appropriately And Generously

Well, fuck the senate and fuck the Republicans who own it. Fuck the horse they rode in on and fuck their unbelievably selfish, self-serving actions. They themselves have fucked justice and the Constitution and the very basis of democracy, not to mention the fucking they have done to the American people themselves. Fuck Donald John Trump and fuck Rudy Giuliani.
Fuck Ivanka and fuck Jared.
Fuck Donald, Jr. and that other brother, Beavis or Butthead. I can't remember his name.
Oh yeah, Eric.
Fuck the assholes who voted for DJT and who still attend his rallies and cheer and yell and laugh with joy because finally, FINALLY, they have a president who is as racist and ignorant as they are.

Upset? Me?
Nah. I knew this was going to happen. Well, as pertains to what happened today. When Trump got elected I knew shit was going to be bad but to be honest, I never really thought that it was going to be this bad. That not only had the country become something I did not recognize as my country but that the justice system would fold like a tissue-paper origami made by a four-year old when confronted with the wrong-doings of their fat, naked emperor.
I figured he'd do things like rollback environmental protections and laws protecting people of color and different gender identities and people seeking refuge in our country, but honestly, I thought that courts and judges would have some say-so about these things.
WHAT A FUCKING FOOL I WAS!

So. Well. Okay. That happened.
Yes. That happened.
And you know what? I would not be surprised in the least if he doesn't win the election this year. The lying, pussy-grabbing, demented, cruel, willfully ignorant, narcissistic, bloviating, white nationalistic, ugly, ugly man with no moral compass at all has some bizarre hold on so many people that yes, if it happened once, it can happen again.

The United States of America- it was a bold experiment while it lasted.

Meanwhile, here in the hinterlands, we go on with our lives. I spent way too much time in town today. I didn't mean to. I knew I had more stops to make than I wanted to make but I figured I could zip, zip, zip around and get them done.
Haha!
The main problem was that I first went to Bed, Bath, and Beyond for curtain rods because I've bought them there before but they had nothing I could use. So of course I had to go to Target and you cannot get in and out of Target in less than half an hour. It's just not possible. And it's even possibly illegal. I'm not sure.
By then I was hungry but I didn't want to take the time for a restaurant and I didn't want fast food so I dashed into a Publix and bought sushi which I ate on my way to Joann's.
And guess what? Here's more proof that I'm an asshole- I finally downloaded the Joann's app and signed up and what would have been a thirty dollar purchase ended up costing twelve bucks with today's online coupon.
I found some incredibly beautiful pima sateen cotton in just the color I wanted for my curtain. I wanted two yards and there were two yards on the bolt. I bought it!
Then on to Costco. I got the things on my list there and nothing else.
By that point it seemed as if I'd been in town for days and I was starting to tremble.
"You can do it!" I told myself. "One more stop!"
I kept thinking of a dream I had two nights ago where I was at a music festival and got so anxious that I started hallucinating. "Damn," I thought in my dream, "This is not good. I need to go home now."
But I wasn't hallucinating today so I went to Publix #2 and again, got what was on my list and DID NOT RUN INTO ANYONE I KNEW and also, did not die.

I came home where this was going on. 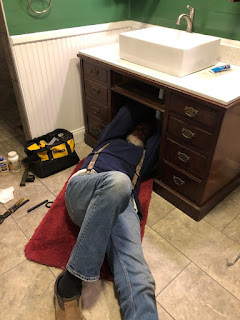 Hot, hot, HOT! I love a man who can do things. Real things. Things that involve plumbing and drilling and so forth. 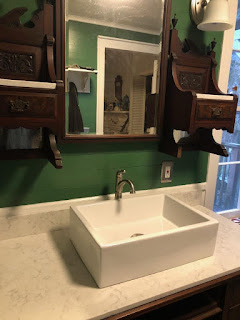 And I put up the curtains in my bathroom that I made yesterday. 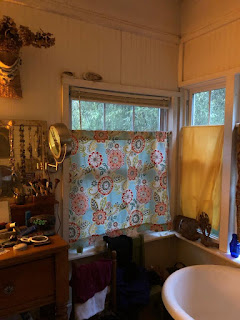 That's one of them. The contrast in our bathrooms says so much, doesn't it?
And tomorrow I'll get to work on the curtains for the windows to the right.

It's raining. It's cold. I'm watching things happen in my country that I never thought to see but on the other hand, I'm living a life I never thought I'd see either.
In a good way.

Life is just so confusing, isn't it?

Happy Friday, y'all. Or at least as happy as it can be under the present circumstances.