A Sunday That Was Far Better Than Saturday 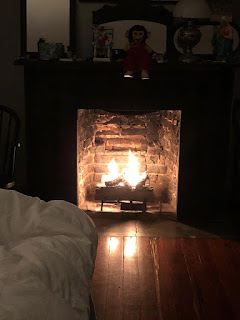 Well, it's not so bad in my house without the usual central heat. The cats do keep looking at me like, "Do the human magic, Human! Make it warm again!" I've got the gas logs on in three of the five fireplaces in the house. Of course originally they were wood-burning fireplaces but somewhere along the line they got replaced and I'm not upset about that. Fireplaces can be lovely and crackly and magical but they can also pull all of the cold air from between the door and window frames in a drafty old house which makes it colder than the fire warms. I know this from experience. Experience that after forty years I still remember.
That was a shack, truly, and there were cracks between the wall boards and floor boards so it wouldn't be quite the same. This house is still solid and was built far better than that one to begin with but still- the gas logs work nicely. And there are so many doors in this house that I can shut off entire areas to keep the rooms warmer so it's pretty cozy, really. And even though they're gas fires, not real fires, they're still pretty. I especially love the one in our room pictured above. It's the most primitive looking one and I feel certain that it, unlike some of the others, has not been rebuilt or rebricked or whatever it is they do to fireplaces to restore them for use. 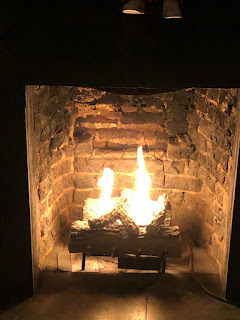 Jessie brought the boys out this morning. Everyone was fine and merry. I remembered to give August and Levon the last Christmas present which was delivered after they left for North Carolina. It was a punching guy and they had great fun in the hallway, knocking him over and watching him stand back up (mostly) but in a little while, we noticed that Levon had found a different use for the smiling wrestler. 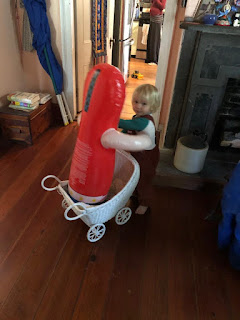 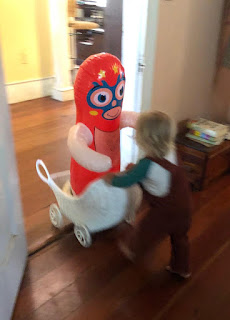 Sorry for the blurry boy but he was moving whereas his passenger was not.

We decided to go to the Hilltop and get our lunches and eat outside. It was a good plan although the boys really were not ready to leave my house. Levon literally said, "Stay Mer's house." Getting them into their carseats is always a process and this one was even more interesting. August tried to escape by getting on his daddy's truck. 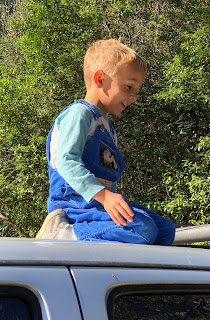 "You climb up here!" he told me.
"No. I will not," I told him.
By some sort of mommy magic Jessie got him down and buckled in and off we went to the Hilltop where we got delicious foods and ate outside in the warm sun and watched customers come and go from state troupers to little old ladies fresh out of church in beautiful fancy hats. 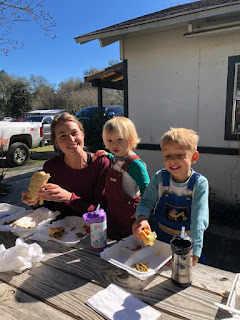 It was so much fun.

And then they drove me home and although the kids wanted to come in and play some more, Jessie wanted to get Levon home for a nap and so off they went with promises to have them back soon.

Here are pictures from Dog Island that Mr. Moon sent me. 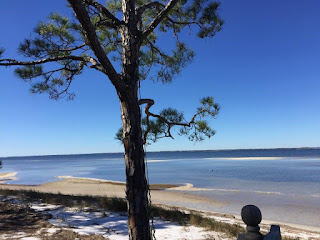 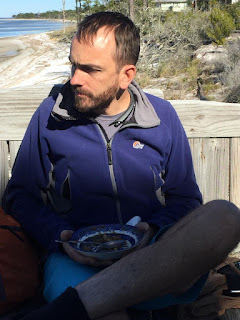 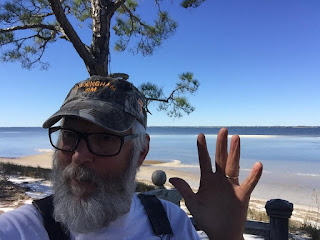 Oh, those men! Oh, that sky and water!
They had taken last night's leftover chili and sourdough bread to eat for their lunch and this was on their break. I bet they washed their bowls and spoons in the bay.
They're on their way home now and I can imagine they are both so tired.
I am waiting to hear the report about what they've found and what sort of plans they've been forming.

I better go get some supper started so I can feed my man before he falls asleep in his chair.