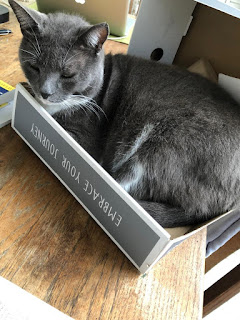 Jack found his happy place this morning on the porch in the box my shoes came in. I like the way his colors match the box's colors and the upside down advice to embrace his journey. I think that Jack does embrace the journey quite frankly. The journey generally being from our bed to the kitchen to outside to sit in the sun to back into the kitchen and then to bed again. He doesn't really travel very far, that one.
He knows what he likes.
He embraces that. No shame in his game.

I did take a walk this morning, just down the sidewalk to the county line but it was nice. 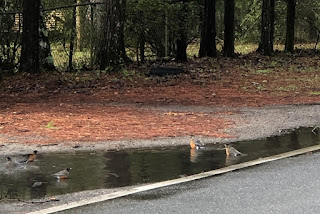 Can you see the robins? A flock of them were in the trees above that puddle and they were flying down and enjoying bathing in it, so many at a time. I could only get close enough to take this not-very good picture and my presence disturbed all but these brave souls. It was such a cheerful sight, despite the gray sky.
As was this. 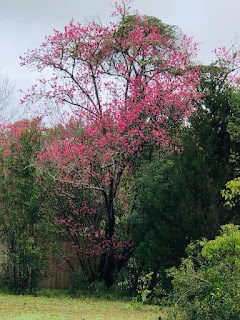 A beautiful redbud in a neighbor's yard.
It's really far more stunning than the camera captured.

When I was on my last quarter mile I crossed paths with a local guy whose name is Pinot. I am not making this up. His brother's name is Mango. I believe I have mentioned them before. Pinot was carrying a plastic bag and a machete. I greeted him and he greeted me and I said, "What are you going to chop?" motioning to the machete.
He explained that he was going down to No Man Lord's place to help him with some things. He didn't call him No Man Lord. He called him "the guy with the cross in his yard." Of course I knew exactly who he was talking about. Turns out that No Man Lord's name is actually Harvey. I should have already known that but did not.
Anyway, Pinot and I talked for a few minutes. It turns out that he's the same exact age I am. Also that his wife just recently passed away. Also that when he was a little boy, his mama used to iron for Miss Posy Taylor who lived in the house next door to where I live now and that he, Pinot, had rubbed the irons on the cement walk to the steps to smooth their surfaces. These were the sorts of irons that you had to heat next to a fire or on a stove. Miss Posy Taylor worked as a nurse or something and she had lots of white uniforms. I've also heard that someone used to work as a dentist from that house but I do not think it was Miss Posy Taylor.
I wish I had more answers about these things.
Anyway, it was a nice chat and he took off for Harvey's and I took off for home.

I did a few unlikely things around home today including...dusting.
Don't get excited. I didn't dust very much. I've been thinking lately that I should take a week or so (or a month or so) and tackle each room in my house, one at a time. Do true, real cleaning in each. Windows, baseboards, walls, window sills, ceiling fans, curtains, floors, furniture, closets, etc., etc.
The very thought of this however makes me want to die. As much as I know it needs it and as much as I know how happy I would be with the results, it just seems like way too daunting of a task. A task that I know I can do but a task that I truly do not want to do.
I shall ponder this for awhile. Meanwhile, today I did what I did and that was enough.

In the early afternoon a guy who owns a heat and air company came over, as scheduled by Mr. Moon to check out our heating and air needs. He looked at the unit. He came in the house and measured the intake thingee. He also measured and took note of each air vent which was a fairly traumatic situation for me as they are on the floors which are...well, very dusty in some cases. But he was polite and professional and although he may have been thinking that I am a slut of a housekeeper, he did not say so out loud. Of course. He looked under the house. He did math on a piece of paper with a pen. I was impressed.
So that process is underway. Of course we no more need a heater right now than we need a llama in the kitchen. It's very warm and very humid and I expect the azaleas to start popping out any moment.

I'm pretty sure that August and Levon had a much more exciting day than I did. As proof, I offer you these pictures that Jessie sent me. 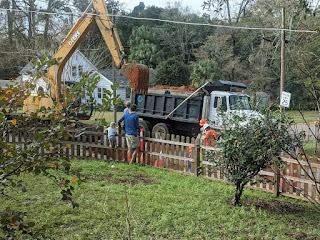 This was happening right in front of their house today. Can you imagine Levon's excitement? It's like Keith Richards showed up on my front porch, asked if he could plug in his amp, settled into one of the rocking chairs and started playing. Yes. That exciting. 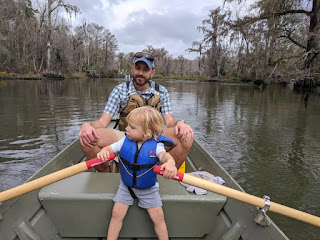 Look at that boy! Do you think his papa is proud? 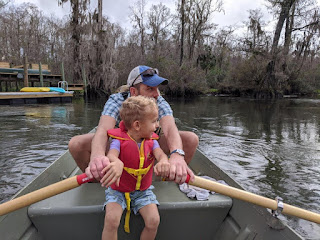 And August. I wonder what he and Vergil were looking at. It must have been amusing.
I love how Vergil takes advantage of the trails and rivers around here, sharing them with his boys. They are learning so much about the parts of North Florida that so many of us really don't bother to take advantage of. I am guilty of that myself, feeling that going to Wakulla Springs and taking the jungle boat cruise and then dining in the lodge there is seeing the real Florida. Which it is, in a way. But not in this way. A way in which you actually have to hike and row and paddle to access.
Lucky, lucky boys. They will be far better and healthier humans for it. And isn't that the goal of it all?
I think so.