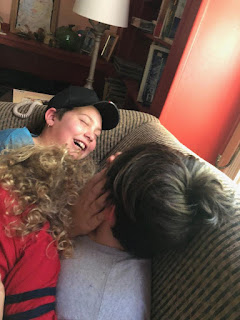 That, my friends, is what the kids call a "family sleeping pile."
They love to do this. It brings them much joy as you can see and there were no tears at all until Owen "pressure pointed" his brother which made Gibson cry for a moment and then he said, "Now it's my turn to pressure point Owen!"
Not under my watch, kid.

I had texted Lily this morning to see if her children wanted to come over here to play for awhile to let her get a few things done. Lily's like me (too much like me) and things like filling out forms for schools and making appointments are ridiculously stressful and she had some of those things she needed to do. But that's not why I had them over. I really did just want to see them and hang out with them and she said that would be fine and I came and got them and they were all happy to come to Lloyd. It was a raucous good time. The boys and I played the card game Battle and I got soundly beat and we ate lunch and we played the matching game. Maggie plays that with us. 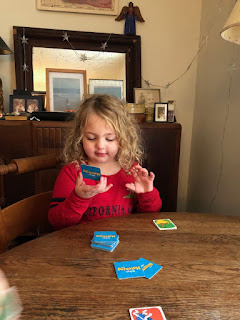 We were on our second game of that when Maggie became bored and threw all her tiles onto the table and Owen, with the calm acceptance of a much older person said, "Well, guess we're done!" 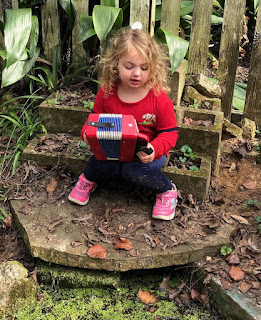 Maggie took the kid accordion out to the backyard and sang a lovely song whose lyrics included, "Mer's so cute. Mer's so cute." I'd post it but I'm not having any luck with getting videos from phone to blog these days. I need to figure that out.
She really has a lovely singing voice and I'm not kidding.

We chased Liberace out of the house, much to Liberace's pissed-offedness. You don't realize how huge that bird is until he's inside. Maggie and Owen collected eggs and got four and Gibson cuddled with his Mer a lot. He's my lovie. They let me read them a  few books which was great although they were mostly family sleep piling as I read. Finally, I texted Lily and said, "They say they are ready to share their love with you again," and she texted back that she would come and get them and she did.
But it was fun. They actually spent a lot of time playing a make-believe game which involved Gibson either being a dog or the kidnapped son of the police chief. I tried to tell Owen about O. Henry's story, The Ransom of Red Chief but he wasn't that interested. And Magnolia played by herself with babies and with the little farm for awhile.

Of course I had to take a nap when it was all over.

A few days ago Mr. Moon's sister sent him two pictures which I showed the children because the subjects are Boppy's grandparents. Thomas Henry Moon and Annie May Krisle. Thomas was born in 1889 and Annie Mae was born in 1891. Henry died at the tragically young age of forty, having stepped on something in the barn that cut his foot which got infected and killed him a few days later.
This was before penicillin of course. He left Annie Mae with three young children and I'd heard stories from Glen's parents about her that left me astounded. She was known as "Mammy" to the family by that time and I had an image in my head of what she might have looked like. She began a business of making brooms after Thomas died and remarried but from what I have heard, her subsequent husband was much less of an asset than a pain. In her later years she lived with Glen's family and I suppose she had dementia but before that set in, she did the work of four women, supporting her children. Not only did she run her little business but she sewed for the community, saving the scraps with which she made quilts by the dozens if not more than that. She made each of her kids (two boys and a girl) a hope chest and she filled all of them with quilts for adults, babies, and children. She also gave them china, tablecloths...I don't know what all. She set bones and treated injuries for those in the community who couldn't afford a doctor. She cut hair. She baked cakes for everyone at Christmas. My mother-in-law told me stories of Annie arriving at her door with literal buckets of batter for her to bake in her oven to help her make these cakes. She fed the hands who worked the farm that Mr. Moon's dad share-cropped. I've heard that she barely slept and would take it upon herself to paper her walls in the middle of the night sometimes, slapping the pasted panels up with a broom. Even the ceiling.
She loved good china. She was strong and she was amazing.
And I'd never seen a picture of her until now. 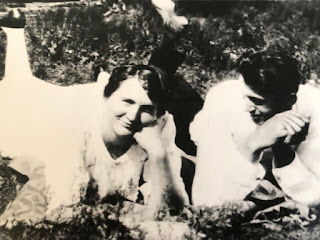 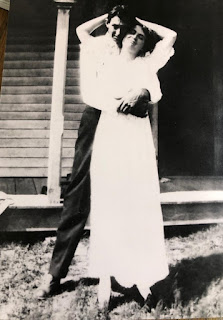 I am blown away. Look at those two gorgeous long-legged people. These pictures had to have been taken sometime before 1930 which was when Thomas died. They were married in 1914 and if I had to guess, I'd say that the photos were taken closer to then.
Look at the way he's looking at her in the first picture.
Look at the way they're holding each other in the second. I am not sure but I think that for the era in which these pictures were taken, these were audaciously candid shots.
Who was the photographer? They lived in a small village literally named Bug Tussle, Tennessee.
It seems almost miraculous to me that the pictures were ever taken, much less preserved.
I can see Glen and his daddy in Thomas. I can see my husband's sisters in Annie Mae. I can see my own children in them. And their children.

Annie Mae lived to be seventy-seven. Glen still remembers her and his memories are a bit occluded by his little-boy memories of her in various stages of her disease which is sad. I wish he could remember her more fully from when she was the force of nature she must have been.
I think I would have been completely intimidated by her, as I am sure that Glen's mother was, but I think we might have gotten along.

Well, all of that is on my mind tonight. I need to talk to Mr. Moon's sister to find out more. She is about six years older than he is so she has more memories. I also need to thank her for sending us these pictures. They mean a lot to me. We'll put them in a frame and hang them.
If for no other reason for me to cherish these pictures, they show the sort of love that my husband's family seemed to have when I met him. I couldn't believe their affection, their ability to take in and love whoever came their way whether step-grandchildren, grandchildren, or the spouses of their children. I owe so much to that family that it's ridiculous.

Thanks for coming along with me on this particular segue into our lives here in Lloyd. I could be wrong about many of the facts of what I remember Grammy and Paw Paw telling me about Mammy but I think I have the gist of it.
She was amazing. And Thomas Henry must have been too.
And they surely loved each other.
What a sadness that they got such a short time together. Fifteen years. Not nearly enough.
Everyone has a story, as Yoko Ono said. I wish I knew more about theirs.