It Was The Best Dream 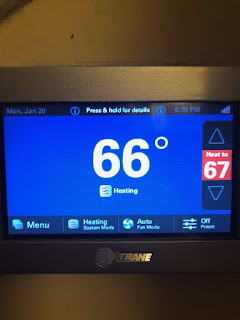 I woke up this morning and did not even want to get out of bed where it was warm and safe and where Jack was firmly positioned next to my hip. Although I knew that it was a possibility that the heating crew would be here today I didn't put any stock in that idea. I thought that tomorrow would probably be more likely, even Wednesday.
But. I got a text from my husband saying that they would indeed be here between 9:00 and 9:30 which was plenty of reason to get up and get to it and so I did.
And the men showed up before 9:30 and I offered to make them coffee or bake them a cake or, well, anything.
Turns out the only thing they needed was for me to show them the vents where nothing came through and where the breaker panel is and so forth which I gladly did.
I sewed all day and the dress is done but for the hem but it looks so godawful on me I may end up wadding it up and throwing it in the trash.
It's not the dress's fault. I'll leave it at that.

Anyway, as I sewed men crawled underneath my house and rehung some ductwork that yes, critters have torn up, and took things apart and put things together and put the old unit on the truck (buh-bye,  you POS!) and put the new one in its place higher off the ground and hooked up stuff and did whatever sort of thing it is that these magicians do and the owner of the company came by and we chatted for awhile. He's a very sweet man and we've known him forever and he's been going through things that would probably kill me but he seems to be doing it with grace and fortitude.
I do not know how.
And finally a new thermostat was installed and the men cleaned up all their tools and stuff and drove away and it's warm in my house.

I am so grateful. So, so very grateful.

And that's why I didn't make it to the Junior Museum but a lot of the rest of the family did and Rachel sent some pictures. Here are two of my favorites. 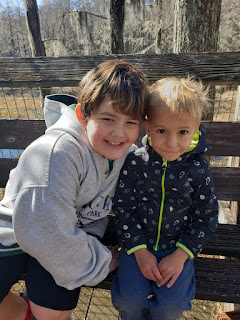 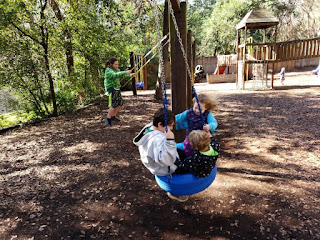 I'm sorry I missed that but it is what it is.

Of course the boys were out of school today because it's Martin Luther King Day and there have been so many tributes to him on Facebook, or at least my little corner of it, and I'm glad of that. But they also make me sad because I don't think Dr. King would be so very happy with what's happening now in this country. Perhaps if he had lived we would be in a better place but the fact is, his dream is still just a dream for so many people.
Still, I refuse to believe that his life was for naught. The dream he dared to dream infused so many with hope and with determination, gave courage to those who believed in that dream. And there has been change, of course there has but it's been so slow and we are so far from a full realization of true equality for all.
Let's face it- little children are still judged for the color of their skin, not to mention their parents, grandparents, uncles, aunts, and cousins. And their older brothers with far too frequently mortal results.

Okay, okay. I know that you know. I know we all know. But I'll never forget the day Dr. King was assassinated. And then, less than two months later Robert Kennedy was shot and killed. I believe that those two events along with the assassination of President Kennedy truly influenced the way I came to see this country. Not as a place where freedom rings but as a place where shots ring out to silence the voices of those who dare speak out against hate and intolerance.

Meanwhile, here I am, a very white woman living in a very racially mixed community in a house that might well have been built by the ancestors of some of my neighbors and I am fortunate in all regards, especially as to creature comfort, to the security of having a solid and warm house to shelter me as I sleep.
I wonder how No Man Lord is doing tonight in his RV with the blue tarp for a roof.
Probably not so well.