I Love That Big Boy 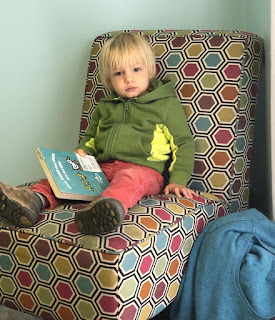 This morning I felt almost merry as I bustled about getting ready to go to town. I had convinced Mr. Moon to stay home today and I made him a nice bowl of oatmeal and I let the chickens out and fed them their scratch. I got dressed and got in the car and took off. When I got to Jessie's I helped get the boys in their shoes and jackets and buckled into their car seats and off we went to see Melissa. Levon seemed neither excited nor worried about getting his hair cut. He's a fairly pragmatic little guy for the most part, not unlike his brother and his dad. When we got to Melissa's shop August said, "I know this place. I can see how it looks inside, too."
"I bet you can!" I told him. And we tromped in to be greeted by the beautiful and lovely Melissa. She trimmed Jessie's hair first and then they discussed what Jessie wanted Levon's hair to look like. Melissa, who is so wise in the ways of children, asked which part was the most important because if a little one starts crying in her chair she says, "That's that!" and sends them off because she refuses to traumatize the child. Jessie said that the bangs were probably most important and Levon sat on Jessie's lap and accepted the cape being put around him. It was the same cape that Owen used to wear when Melissa cut his hair. 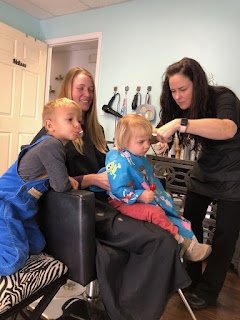 Both boys were given lolly pops and the hair cut became a group effort. I just sat and watched and took pictures. The little guy didn't seem a bit worried about the process. He let Melissa do her thing and if there were an award for a stylist getting a child's hair cut in a short amount of time, she would win it.
Snip, snip. Reassurances. Praise from all of us. Lolly pop rinsed off in the shampoo sink. Lather, rinse, repeat.

Here's what Levon looked like when it was at the mullet stage. 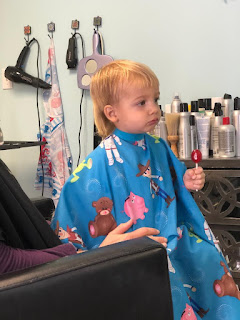 We considered leaving it like that.
"I do love a mullet!" said Melissa. She's from Alabama. We discussed Joe Dirt. She continued to snip and then she did a little buzzing which made the boy laugh and then, TA-DA! It was done. 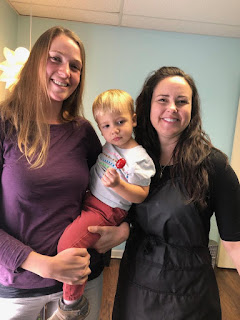 He's still our Levon but he's a much more mature Levon. Don't you think?
Again, he was neither impressed nor worried, just accepting his new hairstyle and still enjoying his lolly pop. The brush on his neck with powder did make him giggle.

Once again, Melissa worked her magic and we love her.

Off we went to Midtown Pies to see May, meet Lily and Maggie, and have lunch.
We had delicious salads and pizza and Maggie played with the salt and pepper and cheese shakers again and May changed the channel on the TV to something for kids at August's request.
He was in heaven.
It got very busy just as we were finishing our lunches and we waved our good-byes and kisses to May. And then the children posed for me at my request. 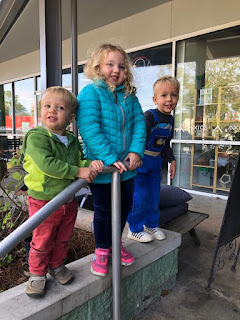 When we were eating I was looking at Maggie and I told her mama, "You know, sometimes she reminds me of Madonna." So many of her expressions are very strike-a-posable. That girl's going to be something. That girl is already something.
She hugged August and he hugged her back when we split up in the parking lot. And when we got to Jessie's and she dropped me off at my car before taking the boys to a playground to try and wear them out for a nap, I kissed them and told them I loved them.
"Love you!" said Levon.
"I love you, big boy, "I said.
"I love you, big boy!" he said back to me.
Who would have thought that being called big boy would ever be something that could please me so much?
Who would ever have thought that watching my fifth grandchild get his first real haircut could move me so much?
Yes. I did tear up today and Jessie laughed and told the story about how I cried once when she was little and was just getting so good at roller blading.
"You're growing up too fast!" she claimed I said as I was crying.
I'm sure she's got the story right. I'm also sure that children do grow up too fast in the eyes of their parents and grandparents.
That's life.
It was a good day.