Glory Days Then And Now 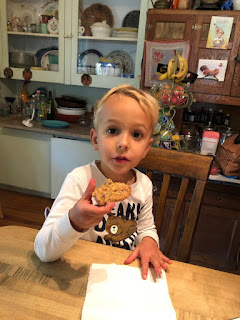 This morning Jessie and the boys came out, mostly to be in a different environment for a few hours. Yesterday's outing to the doctor was great fun but didn't quite satisfy Jessie's need to get out of the house.
When August got to the kitchen porch, he stood for a moment and sniffed deeply. I thought he was smelling for the tea olive but that wasn't it.
"I smell chocolate chip cookies!" he announced.
Wishful smelling.
"I don't even have any chocolate chips," I told him. "I'm sorry."
"Well, that's okay," he said. He seemed a bit downcast.
"I could make some oatmeal cookies though," I said. "Do you like oatmeal cookies with raisins?"
"Yes!"
"Cookies!" said Levon.
And so we made cookies.
Levon was still under the effects of his last dose of Tylenol so he wasn't feeling too bad. He found the baby carriage and drove it around even though it was empty. It's not the babies, it's the movement for that boy. And when the cookies were ready to eat, he was ready to eat them. 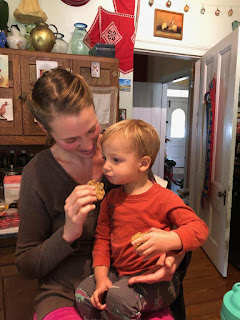 He had his own cookie but he wanted to share Mama's too. He needed a lot of Mama today.

We really didn't do much. Ate some leftover soup and read books. Mostly the boys just wanted to eat cookies which is hardly surprising.
August did demonstrate that he knows how to play CD's on my stereo/CD player. The stereo part doesn't work anymore and although I do not have any proof, I believe a child may have been involved. Anyway, first August played his mother's band's CD. "Under the Clay" by the Cicada Ladies. He loves that CD as do I. And then he said, "Let's play some of your blues, Mer," and so we played a little of Keith Richards' "Crosseyed Heart."
That cracked me up, though. And Jessie too. "Your blues, Mer."
Yep. My blues.

They didn't stay too long because Jessie wanted to get them to take a nap and they weren't inclined in the slightest to do that here.

After they left I wasn't quite sure what to do. I tidied up and finished some laundry. I'd already watered the porch plants before they got here. I beat myself up for awhile because I'm so obviously living a life which is not nearly as full as it should be. I mean, I could always clean something and I definitely should clean something but I didn't feel like doing that. Finally I got out some cloth that I'd bought a while back to perhaps make curtains out of for my bathroom. Or, actually, one curtain. My bathroom has two walls of windows which would be fantastic if one of those walls didn't offer a full view, albeit somewhat blocked by trees and bushes and bamboo but not entirely, to our next-door neighbor. The other wall offers a full view to the rest of Lloyd. For the past almost sixteen years I've just kept the blinds closed on that front wall and have an assortment of very shabby and not-very chic fabric hung from the other windows which face the side yard. I've always wanted some of those plantation shutters that I could put in the bottoms of the windows to block the view for anyone who isn't on a ladder but would allow the sun to come into the bathroom above them. Although I have suggested this to my husband dozens of times he's never taken much interest in the idea.
It finally hit me the other day that I could just put curtains halfway up with tension rods to achieve the same effect.
Yes. It took me almost sixteen years to figure that out although let's face it- it took me 65 years to discover the joys of parchment paper in the kitchen.
Blah, blah, blah. I got the fabric out that I was going to use for the one window and instead, cut it in half and sewed up hems and in about forty-five minutes had two curtains waiting for tension rods.
We shall see how they look and maybe eventually I'll get something more permanent on the other windows.

You know, I was just thinking earlier about how incredibly tame and ridiculously law-abiding my life has become. Some of you may not believe it but I lived a pretty wild life up to about, oh, forty years ago.
Haha!
No. True though.
And it's only been in the last decade or so that I've become so damn completely domesticated. Mr. Moon and I used to be far more adventuresome than we are now. I suppose this is normal.
Perhaps I should do a series called "Truth...or Fiction?" about things I may or may not have done.
Yeah, probably not.

But sometimes when I'm doing things like untangling wool or being excited because I got a new crochet hook or trying a new recipe, I look back on those wilder times and I think, really? That was me? Where did that me go?

This is exciting me tonight. 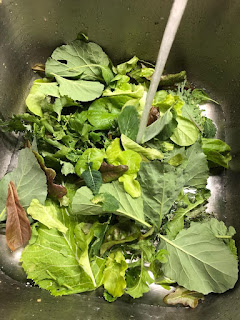 The prospect of salad from the garden. Although truthfully, ever since my early twenties I've loved having a garden and cooking out of it. I'm still the same woman I've always been, just older, creakier, and less apt to do something like, oh, sell a pound of weed to a stranger in New Orleans.