Everything Including The Kitchen Sink 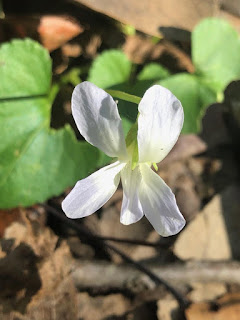 That's a tiny white violet (a joyful oxymoron, I think) growing in my yard today. I love that picture. If you expand it you can see the tiny little hairs (what is their real name?) on the lip petals leading into the sweet center.
I'll just leave that right there.
Sometimes the iPhone shocks me with its ability to take pictures. This one was snapped on my way to the clothesline to send to a friend who lives where it's snowing and I wanted to share that little bit of a different sort of landscape with her.

This morning I felt the need to hang laundry on the line and make a soup and a loaf of bread. I like to start my sourdough the night before but sometimes I just don't realize that I'm going to want bread until the morning I want it and I have found that actually, with a little light coddling and warmth it can work out fine. It's in its rising bowl now and my cast iron dutch oven is in the oven, getting hot as the balls of Satan.

So I started the bread and I started garbanzo beans and I washed sheets and towels and I hung those on the line. I hurried with these things because I wanted to meet Jessie in town at Costco and she was on a schedule because she had to pick up August from his little school at one.
I did meet them and we did a quick shop unhindered, sadly, by the presence of any samples which is always vastly disappointing.
Really, Costco?
Levon wanted to walk and he wanted to also hold his mama's hand so I pushed the cart and he held on to that with one hand and to his mother with the other and it worked out fine. After we checked out we both drove to Jessie's house and Jessie unloaded her car and then took off to pick up August while Levon played outside with me watching him. It was a practically perfect day, not hot, not cold, blue and cloudless, far less humid than it has been. He has his own agenda, his own routine. First he needed to ride the tricycle a little ways and then he raked some grass clippings and put them in the dump truck.
Then he needed to go back inside to retrieve his front-end loader or whatever it is, to attend to his next task which was obviously very important. This is what it looked like. 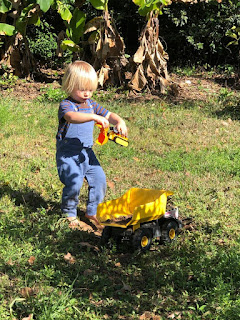 Jessie and August got back and we were planning on going to lunch but August said he didn't want to go and Levon definitely did not want to leave the yard. In fact, when his mother brought him in to get ready he cried and cried and said he wanted to go outside and she very patiently sat by him and said, "I know. You want to go outside but not now. You need to eat your lunch."
"No! No lunch!"
And so forth. Finally, she let him get his front-end loader (or whatever it is) and wash that in the sink while he washed his hands and he was happy. 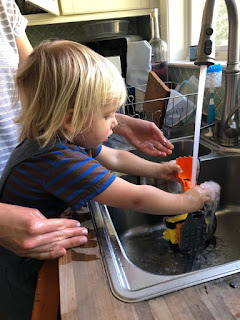 We had already figured out that going out to lunch was probably not going to happen and suddenly, Levon needed pasta in the worst way. August was already happily eating boiled peanuts. 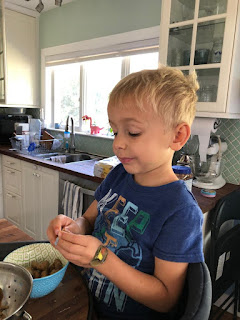 He's good at shelling them with his clever beautiful hands.

And so I took my leave after good-bye kisses. August said that he wanted me to stay overnight and I said that if it got too cold in my house I just might.

By this point it was 2:00 and I was hungry as hell and I needed to get home and finish my chores but dammit! I wanted to go to Joann's. And so I did. I found a pattern and looked for some corduroy but they had no corduroy. Now if you want fleece with some sort of sports logo on it, you are in big luck at Joann's. But corduroy, not so much. I finally went down the flannel aisle and found a bolt of cozy dark teal blue that will do nicely. It seems to me that the work force of Joann's has changed considerably. The older ladies wearing aprons have been replaced by a more alternative and much younger staff. The girl who cut my flannel had green hair and completely drawn on eyebrows and several fetching face piercings. I wanted to tell her that she was very pretty (and she was) but I worried that she would think I was weird. The guy at check-out was young and had long hair and when I said that I had no coupons he said, "Oh, honey, don't you worry! I'm gonna take care of you today!" He rang me up and then scanned the coupon codes that would work best and saved me some dollars. I thanked him profusely and then drove quick, quick across the street to Whole Foods where I bought a head of cabbage for my soup and a take-away container of sushi because I was starving.
Well. Haha. Not really. Not even close. But I was hungry.
I ate my sushi on the way home and was so glad when I got back in my own yard in Lloyd again.
I unloaded my Costco stuff, my Joann's stuff, and my head of cabbage and then took the laundry off the line, folded the towels and made up the bed. I started cooking the beans again, turned the heating pad on under the bread dough, decided that the beans had to go into the pressure cooker if they were to be edible tonight, got that going, tidied up the kitchen, started the dishwasher, peeled, sliced and diced the rest of the things for the soup which I simmered in the broth from last night's chicken.
Mr. Moon came home and we caught up while I put the soup together.
I got it ready in time for him to have a cup of it before he had to leave to go to a basketball game of Owen's. I'm being my typical self and not attending although I have to admit that I feel great guilt about this.
I just can't face more people-time.

And since I started writing this, this has happened. 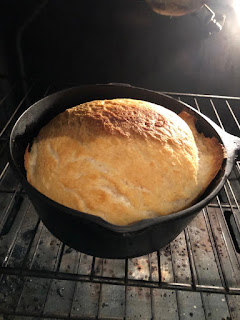 And before I leave, let me give you these that I stole from Facebook. 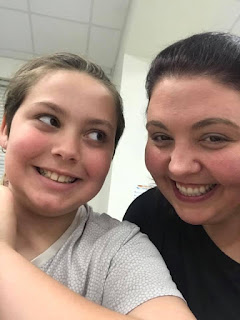 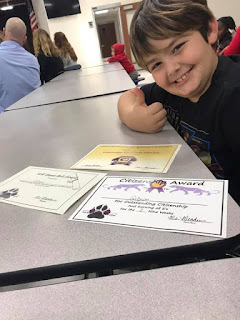 Owen and Gibson both got awards today for grades and other fine things.
How much is Owen looking like his mama? How beautiful is my Gibson?
I'm proud of those boys. So very, very proud.