Chopping And Stirring And Washing And Baking. My Almost Perfect Day 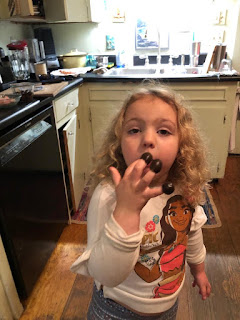 Last night's pizza party and sleep-over was excellent! Maggie helped me in the kitchen and we ended up making four separate not-tiny pizzas. In the picture above, as you can see, she is eating black olives which I had placed on each of her fingers.
"This is the mommy, this is the daddy, this is the sister, this is the brother, and this is the baby," she said and then she proceeded to chomp them all up.
She was surprisingly good at helping to roll and stretch the pizza dough. We are not experts but we got the job done. First we pounded the dough with our fists and then we rolled and then we stretched. 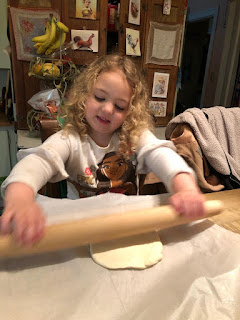 She was really good at helping put the toppings on too, from cheese to pineapple. I was seriously impressed.
I wish I had taken pictures of those pretty pizzas but I didn't. Everyone was hungry and I had to get them in the oven. When they came out, Owen cut them all up for me and he did a great job with that.

And then we ate. Everyone was quite pleased with their own personal choices.

Next up- bath time! Owen showered by himself in Boppy's shower because he's like a man now but Gibson and Maggie wanted to take their bath in my tub which is quite large and deep. Gibson wanted me to be the beauty parlor lady which is something I've been doing since my own kids were little. I adopt a (terrible) English accent and pretend to be not myself and I swear that the children sort of forget that I'm actually someone they know. They'll tell the beauty-parlor lady things that they would never tell Mer. Or, Mom, going back in history.
Last night Gibson told me, as I scrubbed his head and told him in my different voice that he had such "lovely, thick hair" that he is in love with a little girl named Aida but that he's not sure that she loves him too. But he's making her paper hearts.
As the beauty-parlor lady I counseled him to be very sweet to her and yes, give her the hearts, and see what happened.
Maggie didn't care at all about the beauty parlor lady and she didn't want her hair washed but she did play with the ducks and had a good time getting clean.

Then pajamas and purple cows and figuring out sleeping arrangements. Gibson and Maggie shared the bed and Owen slept on the floor on the fold-out mattress. Once we got the pillows and blankets and covers all figured out we read about six books although Owen fell asleep before we were finished and Gibson was nodding at the end of Banjo Granny, the last book. Kisses, tucking in, etc., etc.
Maggie kept telling me she was sleepy but I had my doubts. I told her that I'd be taking a shower which would require me to walk through their room. She said, "When I see you, I'll probably say, 'What do you think you're doing?'"
And then she asked if she watch me take a shower and I told her that I like my privacy when I shower and she understood. It did take a little while to settle her down but it wasn't a huge production and soon she too was fast asleep.
So I got an actual nine hours of sleep before all three of them appeared in my doorway this morning like three little bears and I said, "Come get in this bed and cuddle me!" and they did for a minute and then went to find Boppy who'd already gotten up.
I got up and realized how much easier it was to be cheerful about making breakfast when I was fully rested.
We had our traditional sweet potato and banana pancakes with bacon. 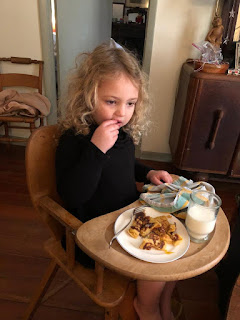 Maggie wanted to sit in "Levon's" high chair and so she did. I thought her new black dress looked lovely on her but the boys said she looked like she was going to a funeral. "No," I told them. "She is elegant!" She likes it. 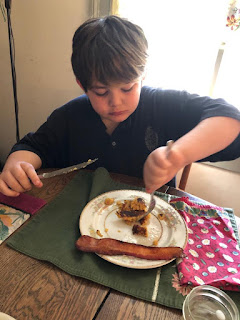 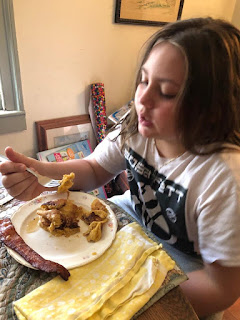 Soon enough Mama came to get them and I got the house back in order and the kitchen cleaned up and got a call from my across-the-street neighbor. Her husband had rotator cuff surgery on Thursday and yesterday SHE tripped and fell and broke her elbow!
Are you kidding me?
So I promised her some food and Jessie texted me that now she feels like she is getting sick and so I made a huge pot of venison and vegetable soup and two loaves of very pretty bread.
I would love to bring all of Jessie's family here to tend to but I guess I don't need the flu. Somehow I feel as if I've had everything and am immune to it all but I know that's probably not true. Mr. Moon dropped off her soup and bread on his way to a basketball game and I took the neighbors' supper over.
So between all of the soup making and bread baking and laundry-doing and whatever else it was I was doing today, I never did take a nap but didn't feel as if I really needed one.

And honestly, this is the sort of day that soothes my soul although knowing that Jessie's whole family is sick is not soul-soothing at all. But I had fun with three of my grands and I got to brush and braid Owen's hair which is so much like his mama's hair although hers was never as long as his is. I got to have good chats with Gibson and sweet times with Maggie and I never had to put on my stern voice to get her to stay in bed.
It's going to get cold again tonight and I have heat and food to eat and people to love and care for.

I listened to some of the orange intestinal blockage's lawyer's testimony and it was fucking pathetic. Basically all they have is bullshit lies about procedural issues. Honestly- even if no more witnesses or documents are allowed in the trial (what a travesty of justice), Americans are watching this and we can't all be idiots.
Of course that's what I thought before the election too, and see how that's turned out.

Well, we shall see, right? November will truly tell the tale.

I think I'll go heat up some pizza.