The Definition Of An Outing Does Change Sometimes 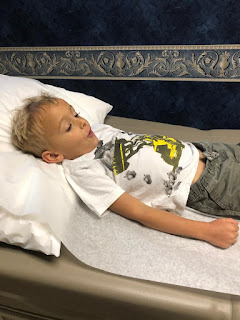 As you can see, August is feeling better. His mother had made an appointment for him yesterday when he just could not stop coughing but of course, as these things go, he was barely coughing at all today. When he laid down on that exam table the little goober said, "Ah, this feels great!"

It has just been too long since I'd seen the little boys so I went along with them to the doctor's office. As Jessie said, "Well, this is one legit way to get out of the house when we all have the flu."
And as I told her, "This is about the most fun I've had all week."
Which is true except for going to lunch yesterday. 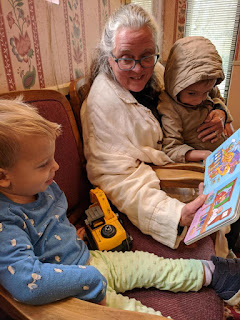 August seemed pretty happy to see me. I think he was probably just happy to see anyone besides his mom and dad. They've quarantined themselves from others for over a week now. He sat on my lap as you can see and let me put his shoes on for him and we talked a lot. In the picture above I am reading to him and Levon in the waiting room. As you can also see, Levon has his track hoe as always and he is wearing his green stretchy pants which his mama says he loves to wear.
Up until now, that elf had escaped the flu but today he started running a fever and looked like this. 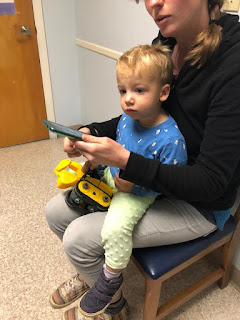 He has that glazed-over-what-in-hell-is-going-on? look to him. The NP and Jessie discussed everything going on and a few different things were recommended for August and Levon is to be "watched" and kept hydrated, etc.

After the appointment I read some books to the boys and then I came home. It's been drizzling on and off all day and it isn't really cold but it feels cold with the bone-chilling dampness and I am so grateful for my heater, my bed, my quilt, my duck.

I never know how to end these posts, the ones I write almost every day that are about nothing beyond this tiny life. I guess I'll say tonight that one of my oldest friends welcomed a new grandchild into the world early this morning and that I have bread ready to go into the oven and that tonight's supper will also involve lemons and garlic. Oh! And that I love my new overalls so much I think I'll just go ahead and order another pair to put away in case I live long enough to wear these out.
That's sensible, right?

Yes. I think so too.