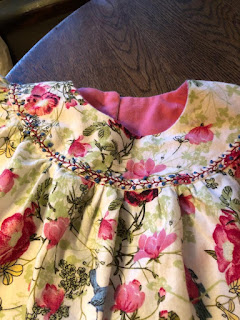 As my darling Sue used to say sometimes, I have had the saddies today. There is truly nothing in this world that is going on that should make me feel that way but there it is and there you go- my whole being has been filled with that deep existential sadness that fills my body and mind and heart like gray cotton stuffing in a rag doll. Dense and not pretty in the least, settled in to every joint and valve and vein.

I even went back and looked on my blog to see if today was the anniversary of my mother's death because it felt like one of those days. A day when the body remembers, even if the mind has pretended to forget but no, she died on January 16, 2013 and if you'd held a gun to my head I could not have told you either the day or the year which says a great deal about me that I'm not proud of but it's the truth.

So I don't know what the deal is. It was a beautiful day and not cold but I couldn't even begin to bring myself to leave the yard to take a walk or go to the post office. Being here was all I could handle and so home I stayed. I swept seven rooms and the hallway, wondering as always how in the world so much dust can accumulate in such a short period of time. I swept up poodles-full of dust along with the black sandy dirt of Lloyd. I did laundry. I washed the sheets. And then I sat on the couch and watched one episode of Schitt's Creek after another, mindless and vaguely interesting, saved from complete ridiculousness by the amazing Catherine O'Hara and Eugene Levy and Daniel Levy and while I watched, I embroidered and beaded on Maggie's dress which was a sort of meditation for my hands. 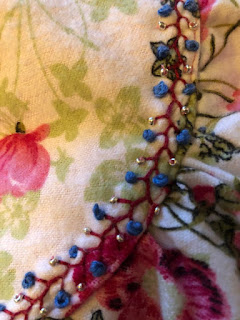 So not perfect and my French knots are ludicrously uneven and deformed but still, I'm proud of the way it turned out.

Mr. Moon came home just after I'd finished and I took a shower, wondering how in the world I was going to manage another birthday party but I put on my nun-nightgown dress and my silver conch shell necklace that May gave me and my favorite silver earrings and my new Dansko Mary Jane clogs and my husband made me a drink and off we went.
When we got to Lily's, Gibson greeted us with his Gibson hugs and he kept saying, "Do you want to see the birthday girl?" and finally we did. There weren't too many people there and Lily had made queso dip and it wasn't so bad. Owen asked me what I thought I was best at doing and I told him "cooking" and he told me that he didn't know yet what he is best at and I told him that that was okay, he had plenty of time to figure it out.

There was pizza and there was salad and there was Maggie who ran up to her mother and hugged her and said, "This is the best birthday party ever!" and there was Wiley Cash and The Darling Lenore who reminded me of Cher tonight, flipping back her long dark hair, wearing her shorts and cowgirl boots. When Maggie spilled orange soda all over the princess dress she was wearing it seemed like a good time for her to open my present and she did and she seemed happy with her new dress and when her mother suggested she put it on she said, "NO! NO! NO! Okay."
She did put it on and here she is showing someone in the kitchen the beans on it. 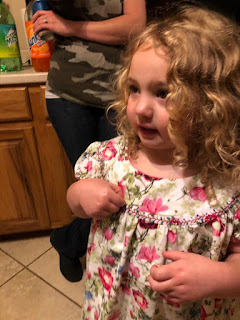 And then there was cake. 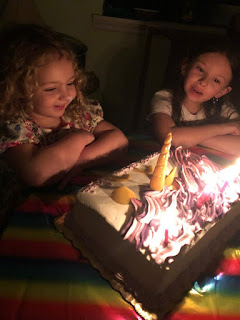 Maggie didn't want any cake and she didn't want any ice cream, either, although her mama and daddy said that she couldn't open her presents until after cake and ice cream and I said, "Why not?" and so she opened her gifts while we all ate our sweet birthday goodness. May and Michael had gotten there by then and that was more sweetness. Jessie and Vergil didn't make it because the boys were exhausted and Hank and Rachel didn't either due also to exhaustion but for different reasons.
But it was fine and there were plenty of folks to wish that girl happy birthday and I survived.
My right eye is twitching like the plump pretty asses at a twerking convention and I still can't figure out any reason at all that I'm feeling this way, gray cotton stuffed and dull and dreary but that's the way it is.
I'm also feeling especially tender towards my husband and perhaps that's just part of the whole thing- being raw and exposed and sad and open to all of it.

I don't know.
I don't know shit.
But I do know that Ms. Maggie June has been birthday-loved to pieces and that she is an amazingly lucky child.

My eyelid twerks and and twitches. I spent hours plying a needle in and out of pretty flannel, we have clean sheets. The moon is round and full as a mama's belly the night before she gives birth. See? There is nothing wrong at all.
And perhaps tomorrow I will feel that in my bones.