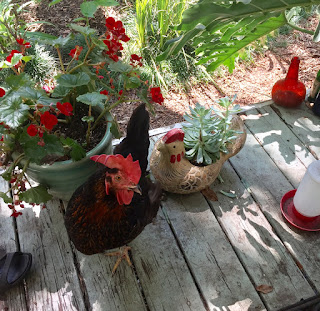 Miss Trixie and her inanimate friend.

Tomorrow my oldest child becomes 41.
That's years of age, not a new number that he'll be wearing on his jersey or anything.
Forty one years old.
How can this be?
Well, it is and that is that.

I have another hippie apple cake in the oven as we speak because Hank chose that for his little family gathering we're having tomorrow at the Mexican restaurant.
I really need new baking powder.

And about a month or so ago I got him the perfect birthday card. It was hysterical and Hank was the person I wanted to give it to.
Can I find it?
No. I cannot.

Yesterday Owen and I had a discussion about adults not knowing everything, which he thought we did. And when I told him that no, that is absolutely not true, and in fact, the more an adult thinks they know, probably the less they really know, I believe he was somewhat crestfallen, having been waiting for the glorious day when he, too, would know everything. (Forgive the pronoun misuse there. Just pretend I'm being all PC and shit and using "they" as an indicator for all sexes including the blurred ones.)
For now, I will try to protect him from the sad, sorrowful truth that after a certain age, we begin to forget the precious few things we once really did know.

My beloved Sue-Sue used to say that our minds were like a tabletop and when we piled new stuff on the tabletop, old stuff would necessarily fall off to make room.

Maybe she was right.

I'm making squash soup and roast chicken for our supper tonight. At least I haven't forgotten how to cook although I sure do keep forgetting to buy new baking powder and I've probably forgotten at least half of the things I used to make. I wouldn't be surprised if at some point, Mr. Moon and I will exist on nothing but soybeans and rice or clam spaghetti.