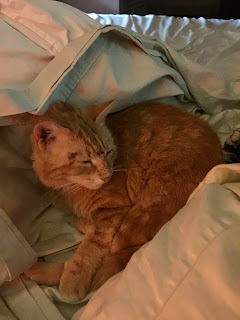 That was Maurice this morning long after I got out of bed. She was happy where she was and I wanted desperately to just get back in the bed with her but I didn't because I'd planned to go get the boys and have them spend some time here today. In fact, I'd pinky-promised them that they could come for a visit this week and by god, a pinky-promise is a pinky-promise.
I sort of also wanted to sit on the couch and watch the Comey testimony because after I read the pre-released statement he'd made yesterday I knew it was going to be interesting. I listened to it on NPR in the car when I could and it was interesting. If he's telling the truth...
And I think he probably is.
He flat-out called our president a liar. Which, of course is so obvious that it's like saying that our president is an air-breathing organism but still, I'm sort of astounded that he said it.

Well, enough about all of that shit. It's going to play out the way it plays out and I hope that DT is trembling in his tiny booties.

I drove to Lily's house where Jason was in charge because Lily was at work and gave Maggie kisses and she gave me kisses and she asked "Boppa?" and I said, "Dang girl, he's at work!" and Gibson said, "Let's get this show on the road!" and all three children were wearing little Rolling Stones buttons that Steve Reed had sent me. Maggie's was on the back of her shirt so that she couldn't get it off and jab her eye out with it and I know that Owen had instigated this button thing because he knew it would please me and it did.
We drove to Publix where I needed everything from milk to toothpicks and and although the boys almost died of boredom we managed to get everything on my list plus a lot more and Owen ordered his own sub and we got to see their mama. We had our lunch in the car and Gibson said, "It's a party!" and then we went to the Bad Girls Get Saved By Jesus Thrift Store where they both got toys and I got two highly decorated tin platters for 90 cents apiece to put cakes or whatever on and then we drove to Lloyd while the boys made up games with their toys and I listened to whatever NPR was saying about the Comey thing.

When we got home everything was a bit of a flurry because they wanted batteries in toys and I needed to haul everything in and change clothes as quickly as possible because...bra...and put everything away and finally that all got taken care of to the best of my abilities.
Also, of course they were still hungry after eating vast amounts of food thirty minutes before and were not happy with me when I said, "No!" and Gibson stalked off into the library and Owen said, "He's going to like his other grandma more than you."
That child. He knows me too well but today I just said, "Well, that's his right to do."
Soon, however, all was well and before their daddy came to get them we'd walked to the post office and shared memories of when Papa Jay's was still open.
"Papa Jay's had the best candy," said Gibson sadly.
"And the best sodas!" Owen said.
They stood in front of the old train station door for me and let me take their picture. It's not nearly as picturesque since they painted it. Dammit. Brown? Please. 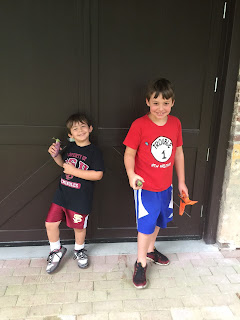 And then we walked a little ways on the railroad track, just the way we used to. 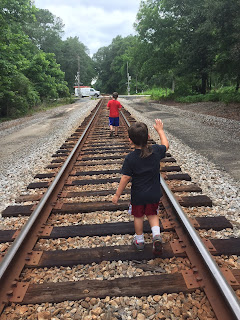 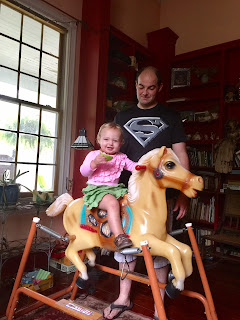 There she is with her handsome and sweet and good daddy.
And yes, she almost always looks that happy.

So. That was my day and my way to avoid the gray blanket of depression that was smothering me this morning. I'm cooking my favorite food which is pinto beans and have bread rising and it's supposed to get down to 61 tonight and the windows and doors are open and here's what Maurice and Mick looked like a little earlier.

They were refusing to acknowledge each other's presence and I so wish Maurice could do the same with Jack. He just tried to come onto the porch and she defended her territory and got another slash across the nose which doesn't seem to bother her in the least.
I swear.