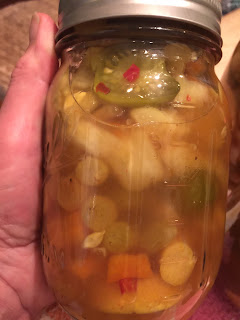 I think the heat and the walks and the week caught up with me today and after I made eight more pints of Sweet and Hot Curried pickles and cleaned up the kitchen I laid down for a teeny-tiny nap which I did not awake from until over an hour had passed. The cucumbers are about to come to an end, the vines getting yellow and withery looking, many of the cukes housing worms so I want to do what I can while I still can. Is that a pun? This batch of pickles had not only cucumbers and Vidalia onions in them but also squash and green tomatoes and peppers. Two jars did not seal and are now in my refrigerator which is starting to look like the break-room refrigerator of the test-kitchen at Vlasic, Inc. My current batch of fourteen-day pickles will be ready to can in five days, I believe. Something like that.

Dottie is still sitting on her three donor eggs and Trixie is spending a lot of time in the hen house. She is truly getting old and tired. Dearie has a bigger flock than Mick does and he still isn't a regular crower. The only two birds who don't seem to belong to a flock are Lucy and Owl and they are still on their own, rarely getting more than a hundred feet from the hen house still. I think they will eventually become part of whichever flock will have them. None of the young hens are laying and it's driving me crazy. I should probably take an entire day to follow them all around to see if they are laying clandestinely somewhere. I mean- this is ridiculous! Or maybe it's not. I don't know. But quite honestly, even with only Camellia and Violet laying approximately three eggs between them every two days, we still have more eggs than Mr. Moon and I use but I would love to be able to supply my kids with eggs.
Okay. I just looked at old blog posts and I got those chickens in March which means they're only four months old and that would explain why they're not laying yet. It might be another two months! Oh my. Well, it will be a glory day when they do and I just need to be patient. 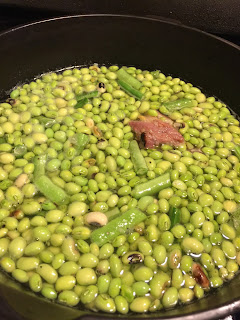 Here's what we're having for supper tonight. Two types of field peas, one a black-eyed and the other a cream. See that little bit of meat poking through? Believe it or not, that's the still-meaty bone from Mr. Moon's Porkasaurus Chop he had last night at the restaurant. It was huge and tasted almost ham-like and despite the fact that he kept giving away bites, he had enough to bring home and if it's wrong to cook a leftover pork chop bone with home grown field peas, I do not want to be right. I think I'm going to make some oven-fried green tomatoes and a salad with cukes and tomatoes too.
Talk about your farm-to-table.
We got your farm-to-table right here.
And Mr. Moon is going fishing again tomorrow and if we get some more snapper it won't hurt my feelings one bit.

Well, I better get to it.