As They Say These Days- GENDER REVEAL!

Mr. Moon and I got smart this morning and went out and picked before it got killer hot. Then I shared a yogurt with Maurice who loves yogurt but only if it's got fruit in it and then I went out and weeded the zinnias and the edamame and THAT WAS ENOUGH OF THAT!
Phew. Already soaked through with sweat but I'm not close to the vomit-point so I feel good.

But I did not come here to talk about that. I came here to discuss the fact that Jessie got an ultrasound this week and so we now know the gender (supposedly- as I have discovered, you can't really be sure until the child grows up enough to tell you) of this little Boo Boo Weatherford.

But first, before I tell you, here's Jessie's most recent pregnant mama picture. With an added August bonus. 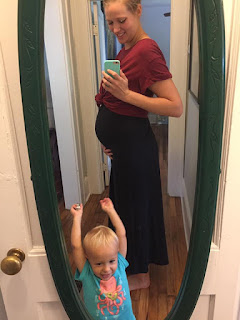 Isn't that a pretty belly on a pretty mama?
And...she's having another boy!
August will get a brother and Maggie shall, for the moment at least, remain the only woman child in the bunch.
Which she is certainly sassy enough to handle with no difficulty whatsoever.

And so we shall get another little boy and oh my goodness! Those Moon women and their boys! Precious boys.
And now I can start thinking about another quilt and before we know it, there will be another birth, another sweet miracle of life for us to love on. Jessie says he's an active little guy, playing around in his watery world, practicing his breast stroke, his Australian crawl, his gymnastics so that when he is born he will be strong enough to play with his brother as soon as possible.

My heart is so happy about all of this. And we're going up to see them in a few weeks. I talked to August yesterday and told him that I was going to come and kiss, kiss, kiss him. And play with him. And read books to him. And bite his toes and fingers whereupon he asked politely for his Boppy.
Ah well. He will be getting us both.

And I'm about to run into town to get ingredients to make these.
Except I'm not going to use zucchini of which I have none, but cucumbers and little eggplants and green beans.
Why not?