Well, I am home.
And so glad to be although I have to say that for a trip which involved neurological appointments and three children in a small house containing half of the household decorating goods available from TJ Maxx along with plenty of antiques, it was a fun trip. One thing that I've acquired in old age is the ability to just let things flow as they will and to step back and let other people control what must be controlled.
For the most part, at least.
I think I do.
I guess we'd have to ask Lily and Jason about that. I have a terrible fear of being the sort of mother-in-law who is annoying and weird and bossy and who doesn't know her place in the scheme of things and when I say "scheme of things" I mean- their family unit.
Also, it's just easier to let someone else be the boss and it's taken me a lifetime to realize that.

We left Jacksonville after we took the kids to a little park to play in and hopefully burn off some energy before the drive. Here are some pictures. 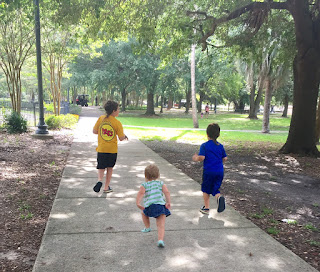 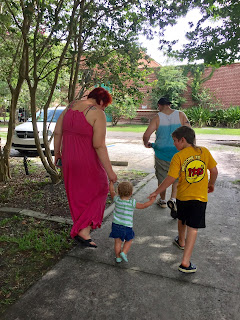 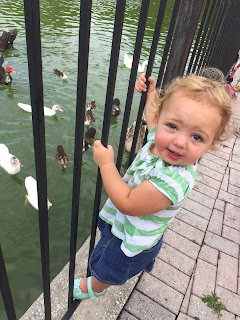 Maggie loves ducks so she was in heaven. She sings a song to herself frequently and it's about ducks. I think. It could be about a doggie. Ducky or doggie. One of those animals.

Anyway, we got to Lloyd and I went out and picked the garden which was the sweatiest, buggiest experience of my life. The mosquitoes are not to be believed.
Thanks, rain!
I got so many cucumbers that, well...this happened. 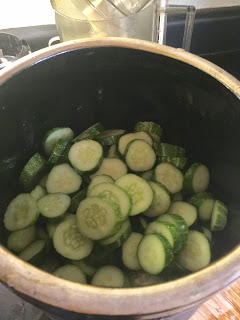 And I sat in front of the TV and shelled the peas I picked and we're having those and our squash and cherry tomatoes for supper. I shouldn't be eating ANY supper. You would not believe what I have eaten today. I can't believe what I've eaten today but I will say that Owen picked out our breakfast spot which is a place where they serve nothing but donuts and cinnamon rolls. Extremely HEALTHY donuts and cinnamon rolls, okay? No soy, no nuts, vegan, and some are gluten-free!
But let's not discuss the fat and sugar in them, okay?
Or the size.
And for lunch we ate...
Oh god. I can't even tell you.

Lord, I've got to get back into some better eating habits.

So it's good to be home and all of my chickens look fine and I swear I can tell a change in Dearie the Rooster from three days ago. His fancy feathers are growing in and he's just so pretty. I think Dottie may have gone broody but she sure isn't sitting on many eggs. As I know by now though, if she is broody, she'll commandeer everybody else's eggs and sit on those too.
Chickens.
It's so nice to be back in my world of poultry and pickles.

And oh yeah- it's mighty sweet to see my sweetie too.

But I'm sort of going to miss having two little boys cuddle with me before bedtime and having Owen read us a story. And having Miss Maggie June toddle into my room and want uppie for her own cuddles and kisses before bed. And supervising the bubble bath. And waking up in the morning and hugging my daughter who has made me a cup of coffee. And making jokes with Jason who is a very funny guy.