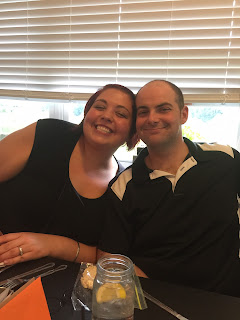 Well, Hank had to work and of course the Weatherfords are in Asheville but the rest of us went out to celebrate Boppy's birthday last night. We chose a local farm-to-table restaurant which has really good food and lots of gardens but we got seated on a narrow porch which was so noisy that it almost gave ME a seizure and the AC wasn't exactly working overtime either. Still. We had fun.
And like I said, the food was good. 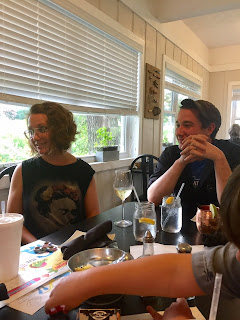 Do you love May's new short hair? I do! 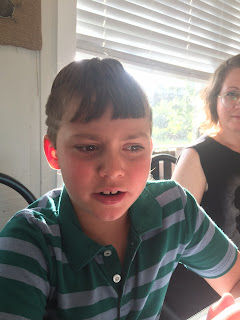 I told Owen he had demon ears. 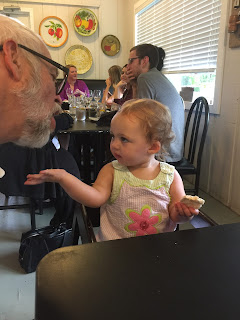 Boppy and Magnolia fed each other. 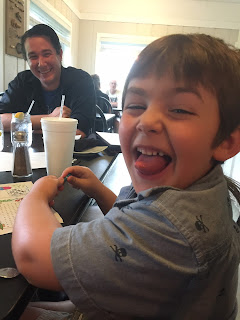 Gibson made faces. I told him to be sweet and this is what he did. 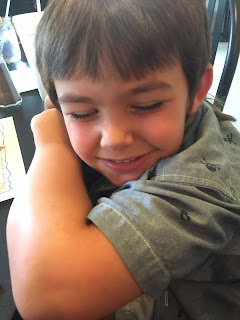 He's such a goober.

Anyway, that's what we did and Mr. Moon didn't even want a cake. I made him his favorite dessert for Father's Day and he pretty much just finished that up. It's a many-layered thing that involves chocolate and pecans and butter and sugar and whipped cream and cream cheese. The original recipe is all junk food from instant pudding to Kool Whip but of course I make it real. I've told my children that if I die and their father remarries that if they sort of like the woman to show her the recipe but not to tell her how I make it although if they REALLY like her, they can.
You know, somehow it does bother me a little to think of another woman using my cookbooks although I know that if I'm dead it won't bother me in the least.
Humans are odd.

Nothing much else to report. I took a good walk which makes four this week and I didn't die unless I did and this is heaven although I do not think it is because mosquitoes are biting my ankles and if there are mosquitoes in heaven it won't be heaven.
That's my theory, anyway.

Did you ever notice how everyone is so worried about whether or not there will be dogs in heaven? I just hope there are chickens in heaven. Maybe cats.

Actually, dogs are fine. Don't let me inflame anyone here. And frankly, I'll be absolutely fine with just being dead and letting whatever bugs want to eat me up and poop me out as I slumber eternally.