The Most Simple Of Days 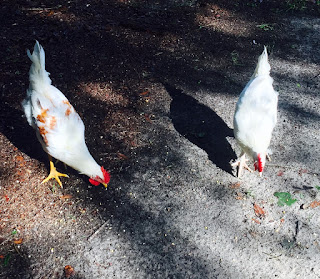 There's Little Richard and Joe Cocker, my two young roosters who like to pretend to fight every evening. Right before I took that picture they were absolutely side-by-side, wing feathers touching. I am very interested to see how this new rooster thing plays out with the hens. Will Richard and Joe each gather a few hens to themselves or will Mick try to take all of them? The young hens still aren't mature enough, it would seem, either to lay or be laid so it's hard to tell at this point.
I know it's slightly ridiculous but my tiny flock still manages to amuse and amaze me and the more I know, the more I realize I don't know and chickens being thinking creatures with their own personalities, what one new flock does isn't necessarily what another one will do. And you have to throw in the personality of the roosters too when you consider the variables.
Who KNEW chickens were so complex, both as individuals and as a tiny society?
Not me, baby. Not me.

So, that was my little chicken speech for the day. I've had a good day and took a walk this morning. When I talked to my husband after I got home I said, "Well, I learned something today. It's NOT just the heat. It's the humidity!"
Which is sort of a joke because that's what everyone says around here, as if it were an amazing and just-discovered fact being revealed. But good god almighty, today it was definitely the humidity. We were between rain storms and the air was as wet as a fish gill which it would have come in handy to have had. I ran into the Sheik. He said, "There you are again. How you doin'?"
I told him I was fine and he said, "Fixing to rain."
"I know," I told him. "I got soaked the other day and it didn't hurt me a bit."
He laughed. He was headed down the swamp path to his brother's house but he reached up to give me a little one armed side-hug and bumped shoulders with me before we went our separate ways.
I do like the Sheik.
The woods paths are holding plenty of water in puddles. It's so nice to feel like every vessel that will hold water is doing so, even if the vessel is a dip in a dirt road or an artificial run-off pond. I think of all the early summers when we haven't gotten any rain at all and how scary and depressing that is. How heavy the heat lays on us without the promise of a cooling afternoon rain. How silent the frogs are. They are chirping and singing these days.

I picked some more beans and cucumbers and decided to just make a few pints of dill beans and pickles, which I did. 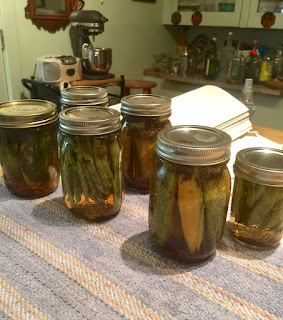 I wish I'd had more to pickle. Once I get started, I don't want to stop. It's a process that feels good to me, feels right.
Shit. Maybe I am a little bit Mormon.
Nah.

Here's a picture of Maurice. 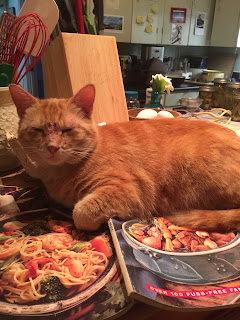 Her face looks like the face of a beat-up old tom cat. She and Jack just will NOT stop spatting and getting into it but I have to tell you that I woke up last night with Jack sleeping against my feet and Maurice up by my bosom.
It was a sort of heaven, lying there with my feline familiars snuggled up to me, the rain falling outside, my husband safely beside me.

It is raining now, steady and true, and I'm going to go make us some supper. I feel peaceful and grateful which is just about my favorite way to feel.