More Than You Need To Know 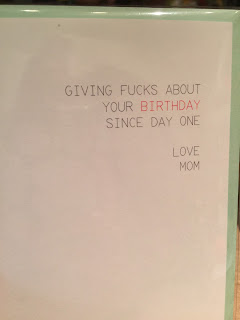 There's the card I got for Hank. When I saw it in a store, I knew I had to buy it and that Hank would be the one to receive it and so it was.

It was a very fine birthday gathering although Lily couldn't make it because she had to be at work at two and so there were no babies or kids there and that was just odd. But May and Michael, and Jerry and Lucia, Hank's other parents were there and Rachel and Anna and Mr. Moon and I were present as well. Here are some pictures which Rachel took. 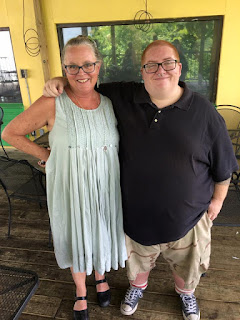 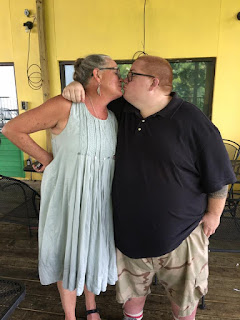 Me and my Hank. 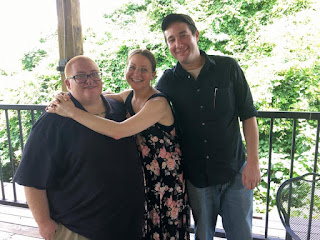 May and Michael and May's big brother. They have always been so very, very close. I don't remember them ever fighting although I suppose they must have. But not often, if they did. 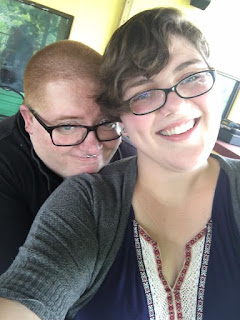 Isn't Rachel darling? She just got her hair cut by Melissa the other day and it's perfect. 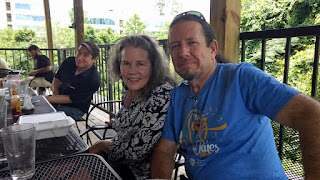 May and Hank's otro parents, as my friend Lynn used to say. We are all family. A blessing for all of us.

The cake was actually delicious, flat or not. As to the recipe- oh hell. You know I don't have one. This cake I make by whim and whimsy. It has grated (or finely diced) apples in it. About two large ones. Around two cups of flour. A cup and a half of brown and white sugar together. Not a cup and a half of both! Two eggs or whatever. About half of a cup of fat- you can use all vegetable oil if you want. I frequently do but this one had a little butter, a little coconut oil, and a little vegetable oil in it. About a quarter teaspoon of salt. About a teaspoon or two of baking powder. About half a cup of milk? As many raisins and chopped pecans as you want. Coconut would be good in there too, actually. About a teaspoon of vanilla.
Hell. I don't know.
Mix it all together and bake it until it's done in a 350 or 375 degree oven.
If you are a baker you can find your way through that forest of a non-recipe with the light of your own knowledge. If you are not a baker and use those exact measurements and it doesn't come out quite right, I'm sorry.

MeeMaw's Caramel Icing is made by mixing a half cup of melted butter with a cup of brown sugar and stirring on a low heat until all of the sugar is dissolved. Add one quarter of a cup of milk and bring to a low boil. Take off the stove and cool for a little while, add about two and a half cups of powdered sugar and about a half teaspoon each of salt and vanilla and beat until of the right consistency to use as icing. Use more powdered sugar if you need to.

Also, if you take your birthday cake to a restaurant, bring your own damn plates and plastic forks and always offer your server a healthy slice of the cake and tip even better than you usually would.
The server will always graciously accept both.

I just finished this book. 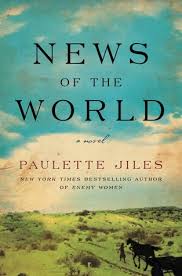 This is one I read with my eyes.
Now you know, I read a lot of books. As do most of you. And sometimes I mention one that I especially like and this would be one of those times. I'd never read anything by Ms. Jiles but I want to read more now. She is a poet and a memoirist as well as being a writer of fiction and it shows. It's a small book and in a way it reminds me of something by my beloved Larry McMurtry. The setting for sure, the plainness of the prose and dialogue. There isn't even any use of quotation marks and there is no dialogue attribution and although this could be extremely confusing in the hands of a less skillful author, here it is elegant and so fine that it actually allows the story to move along as easily and seemingly effortlessly as a fine dancer across a polished ballroom floor.
Well, at least that's how I felt about it. 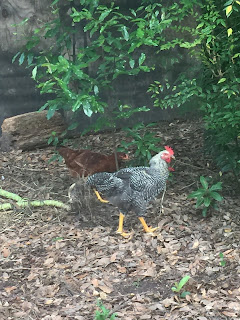 I'm pretty sure that I know why Dearie has been sleeping in the tree. It's because she's a he and as a coming-up rooster, is either afraid or just doesn't want to sleep in the hen house with the alpha rooster, Mick. I don't know why it's taken me so long to figure this out. He's larger than the rest of the hens in that particular batch but some breeds are just bigger than others. Still, lately I've been studying him and I realized yesterday that he is growing what I have always called the rooster's drape, but which is, in fact, called his hackles, which is that beautiful feathered collar-cape which roosters wear so beautifully.
And there you go- another expression explained which has its roots in chickens: Raising one's hackles, which is what a rooster does when he is threatening a fight or trying to simply look more fierce. Also, he is growing out his tail feathers in a way that hens do not do and thus- I am quite sure he is a rooster. He will be an extremely beautiful rooster if he lives long enough.
I hope he does. And the fact that he is gathering hens to sleep with him in the trees shows that he is smart and recruiting ladies for his own flock.
Hank informs me (and he IS the Quiz Lord) that chickens were first kept for divination and entertainment.
In other words, their bones were tossed and innards examined as a method of telling the future, of determining omens, of providing answers for the Shaman who read them, and the males were used in fighting matches where no doubt bets were laid and made by our distant forefathers.
And then, I'm sure, our foremothers figured out that the birds were worth far more to the community as a protein source, both in eggs and in meat.
What this provides for the chicken itself, I do not know, but it makes me even happier to throw them some scratch every morning and make sure they always have food and water.