Just Getting On With It

I woke up this morning with my whole being roiling in anxiety. Not the panic attack type, just your everyday garden variety where life seems too scary to live in all regards.
I can't really describe it but there were tears. A few.
I knew I had to go walk and so I did, pushing it hard enough so that my breathing was concentrated on the out-breaths, a hard push of them out as if the anxiety itself were doing the pushing from behind me, inside me. Both.
I did stop to take a picture of the beautiful pink swamp mallow 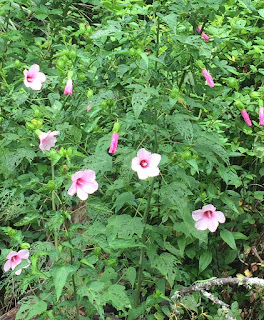 which is indeed growing right next to a swamp which I also took a picture of. 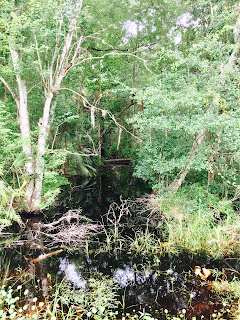 These rain-filled little creeklets always seem to me to lead into another mysterious universe, just hidden from view.

I had been planning on going to Publix to buy garlic to make more dill pickles but supposedly, Mr. Moon was going to be bringing Gibson over around noon and he was going to pack and then he and Gibson were going to go down to Orlando to help celebrate Mr. Moon's sister's birthday. Owen got to go to one of these events a few years ago and it is Gibson's turn. My sister-in-law's sons and their wives and children are there too so there is much fun to be had and it's so special that Glen can take Gibson by himself, which is a rare and precious thing.

But of course noon turned into one and then two and then three and finally, by four my husband arrived with Gibson AND Owen who had wanted to come hang out with his Mer and spend the night. I packed the travelers enough snack food to carry them through the rest of the week if they needed to survive and then made popcorn too. They set off with their bowls on their laps, their water bottles within easy reach, to hit the highway to Orlando. I made Owen some popcorn too and then he wanted Chex Mix and made rings for his fingers with the pretzel circles in the mix and asked me if I knew how to get the Wii started which I did not but I called Boppy and he explained it to me and now the boy is playing various games. 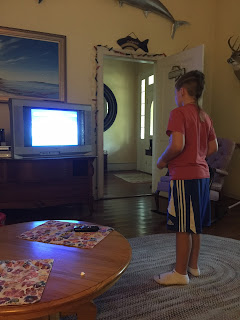 He seems happy. We took the trash to the trash depot together and I found a huge concrete pot that someone was throwing away and I would have loved to have brought it home but it had a plastic pot in it and lots of dirt and there was a tree growing through the plastic pot down into the concrete pot and I couldn't pull it out and empty the dirt so that I had the possibility of lifting it into the car.
But dang, I wanted it.
I could grow an entire herb garden in that thing. Sadly, I left it behind and we came on home.

I still feel unsettled but plenty okay to have Owen here. He's fairly self-sufficient anyway and doesn't need me to entertain him every second. It's nice to have my first-born grand here by himself and I think he likes that too although he did tell me that he's going to miss Gibson. And I'm sure he will. As will Magnolia.

Lily just sent me a video of Maggie singing her ABC's. I just uploaded it to Youtube so I can share it. I watch this and I think about how splendid and amazing it would be if I could see a video of Hank taking his first steps or learning to read or May dancing in the little nightgown that she loved to dance in so much or of Lily and Jessie on the Christmas morning that they were surprised with their puppy Pearl.

So much about this world has gotten so weird and so far out and beyond the realm of what I could ever have imagined but this ability to easily capture our children's first moments, first steps, first words so easily and preserve them for as long as Youtube may be around is a sort of sweet miracle.
Here she is. Ms. Magnolia June, singing with her mama and then giving her a great big kiss.

Our little one-and-only woman baby, smart and pretty and dancing already, beloved by her mama and her daddy, her brothers and her grandparents.

And now I'm going to go rustle Owen and me up some supper. Frozen pizza for him and a long-stashed chicken pot pie for me.
And watermelon.

It's summer time and the living is, as they say, easy.
I can't control the catfish jumping or how high the cotton is but I can surely make supper as easy as turning on the oven.
And Owen wants me to come do some Wii thing and I guess I will.
See you later.