A woman that many of you have never heard of died yesterday. Her name was Anita Pallenberg.
She was at various times in her life a model, an actress, a fashion designer, a gardener, an artist, a mother, a junky. A muse.
She was the partner of Keith Richards for many years and the mother of his first three children, Marlon, Angela, and Tara who died when he was ten weeks old- the tragedy of his father's life and probably hers as well.

She'd been the lover of the Rolling Stone's Brian Jones before she got with Keith. Brian had become abusive and Keith snatched her up, already having fallen in love with her, and took her away, and they were together for a long time afterwards, going through fame and fortune and addiction and parenthood and sorrow and legal woes together. As to all accounts, they were happy for quite some time. 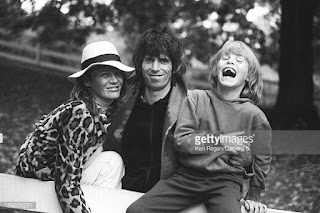 Keith wrote reams about her in his book Life, some of it brutal, some of it tender, all of it real. The way he talked about her is one of the reasons I came to love him in the reading of that book. As he didn't try to sugarcoat his own actions and proclivities, he did not try to sugarcoat hers. Keith is a man who doesn't use people and throw them aside. He's been married to Patti Hanson now for over thirty years. He's had the same personal assistant longer than that. The same guitar wrangler (an important employee in his life) forever. And of course, he and Mick have been together far longer than most married couples ever will. Since they were boys. And when he wrote about Anita, you could tell that he would have stayed with her forever, most likely, had things been just a bit different. Even after they broke up, they remained close. He said, "It was tough. At the same time there was an underlying love that goes beyond all of that other stuff. I can say, 'I love you, I just won't live with you.' And now we're proud grandparents, which we never thought we'd ever see."

Today, he posted this picture on Facebook with the words "A most remarkable woman. Always in my heart." 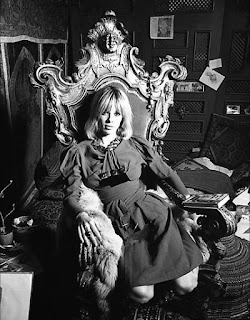 So. That's all. You may never have heard of her but she is a part of my generation's history and I respect her strength and her persistence and her spirit, which must have been magnificent.
There's a lot more to her story but those are a few of the bones.
And my acknowledgement of her influence because trust me- she had a lot.