Today has just been a bugger and that's all there is to it. I woke up with everything from fear to anger to sadness to depression to self-loathing to anxiety floating around in a toxic soup and despite another walk that I pushed myself through, the feelings remained.
I had to go to town. Tomorrow is Mr. Moon's birthday and of course I had done nothing to get ready and so after procrastinating as long as possible here in Lloyd, I went to Tallahassee, first to the New Leaf to get oils and stuff to make a supposedly superior-to-deet mosquito repellent, and then to the fucking goddamn mall to try and find my husband something new to wear.
It really wasn't that bad. I got done what I could although I felt like bolting every second I was there and here's something new- store personnel seem to want to talk to me as if I was a little child who needs to be addressed in a crooning, simple manner. A child who has perhaps lost her mommy and needs some help.
I'm not kidding.
This just pisses the living shit out of me.
Yeah, I'm old enough to be their grandma but I can still figure out how to purchase an item and even operate the damn card machine.
Oh Jeez. I'm just in a very bad mood and I didn't need that sort of reminder that I'm older than the precursor to dirt. Thank you. Thank you very much.

Then on to Publix. Not MY Publix, but a different one and I got behind a woman in line who was buying things like many, many boxes of Lipton soup mix and spaghetti sauces and dog food. And she had coupons. She had coupons that she'd printed out. They did not want to scan. There had to be a careful tallying of coupon and product. More scanning attempts. The dog food did not qualify for the coupons. Managers were called. More than one. And you know when you're standing there and you realize you should just remove your items from the belt and go to a different line but you have a lot of items on the belt and you think that it can't possibly take much longer? And then it does but hell, you've already invested twenty minutes of your life into this particular line? And the woman with the coupons refuses to look at you or offer any sort of apology because she is well within her rights to use these obviously defective coupons? And the cashier does apologize but what can you say because it's not her fault?
Yeah. All of that.

So I finally made it home and hauled everything in through the dense cloud of mosquitoes and yes, I did make up some of this botanical bug spray and it seems to help but my skin is greasy and gross now. At least it does not smell unpleasant.

Mr. Moon and Gibson are back although Mr. Moon is in town doing business stuff. Here's a picture I got from their lunch stop. 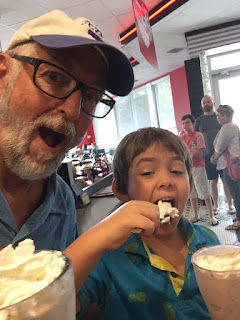 They're waiting on their Steak Burgers and eating their milkshakes. Obviously, someone had some fun today.

And here is a picture of August. 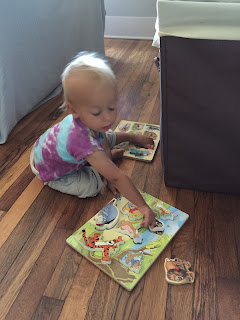 It is reported that suddenly he can do puzzles and goes and gets them himself and proceeds to play with them. I remember when Owen did that. It's like a little lock in the head turns and the concept is learned and there you are...able to do puzzles.

And now I need to go make supper and also, it is the eighth day in this current cycle of the fourteen day pickles and the brine must be drained and boiling water poured over the cucumbers.

I don't feel like doing any damn bit of either of those things but I can't think of anything else I'd want to do so I might as well do what needs to be done.