How To Live Through Another Sunday

I woke up this morning and all I wanted to do was cry.
It was as if some fold in time had formed, wrapping me in a bad memory, a time that was filled with sadness and terror both, and my husband said, "What can I do?" "What's going on?" "Can you tell me?"
And I couldn't and there was nothing he could do but then I said, "Maybe you should go get the boys."
And he did.
He had a flat tire on the way to their house and so the boys got a lesson in tire changing which is a good lesson to learn. 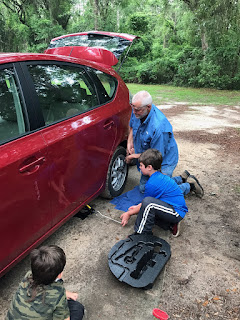 Later, when we were discussing this situation with Jason when he came to get the his sons, Owen insisted that he had changed the tire with "a little help" from his Boppy. And I feel certain that his grandfather would confirm that.
After Owen changed the tire, they went to the grocery store and got chocolate chips so that I could make cookies with the boys. This seemed like a time-honored thing for a grandmother to do with grandchildren on a rainy day. While they were all gone, I picked my first field peas and shelled them. 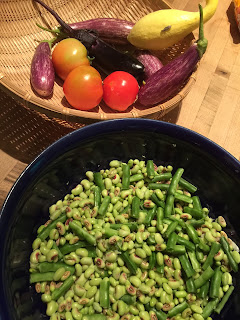 Aren't they pretty? I can't wait to make a supper of them. And I have enough of those little eggplants to make a meal of too. Any suggestions? Hit me up, baby.

So when all the guys got back there was some pizza eating and then we made cookies. Owen and Gibson cracked the eggs and they're getting pretty good at that. Owen can read the recipe to me now and I'm teaching him about cups and tablespoons and teaspoons. We made one half of the cookies without pecans and one half with pecans and everyone was happy. Gibson got the beater and Owen got the bowl for licking purposes. For once, there was no arguing about who got the most. And then, of course, everyone ate some cookies.

Owen and I went out to check for eggs and to find Dearie so that we could study him and we both have confirmed that he is a rooster. We discussed a problem that Mick is having which is that his spurs are so large and so arranged that he is having trouble walking and in fact, when he runs, he now hops like a bunny (I am not making this up) because his spurs are just too much in the way.
Sigh.
I have researched how to trim a rooster's spurs and after visiting a few websites on the subject, have told Mr. Moon that he needs to be the one to do this because I...just...can't.
Ick.
There are SO many things I never knew about chickens until I got them. Who KNEW that you could trim rooster spurs? Or that you would ever need to? I'm not even sure I realized that roosters HAVE spurs but of course they do. And as Owen pointed out, Mick will not be able to protect his ladies as well without the full spurs and we also discussed how the long spurs can hurt the hens when Mick "breeds" them which is what I'm calling it now.
Boy is learning a lot at Mer's.

Mr. Moon bought a watermelon today from a guy in front of our house. It was a very good watermelon and after pizza and cookies, the guys ate some of that. 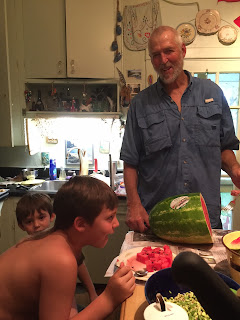 At least they won't be able to tell their mother that Mer starved them today.

Gibson posed for me with the plastic ant I found in the garden. 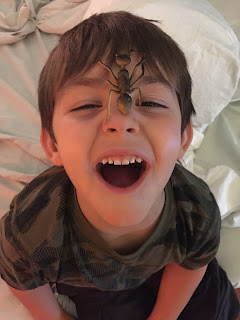 That thing is creepy.
We went out to swing on the porch swing and checked out the still-young banana spiders, aka Golden Orb Weavers. There was just enough room on the swing for us to sit tightly together with a spider on both ends. And then, like magic, Jason came with Maggie who joined us on the swing and then wanted to ride the trike. 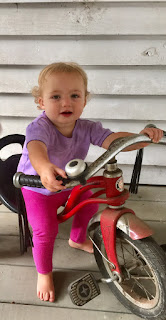 Oh my god. I'm sorry but I just think that this child is the quintessential darling baby girl with that curly hair and those pretty brown eyes and those kissable, kissable cheeks.
Is she a babe or what?
YES! She is a babe of a baby, a love of a child, a hugger, a kisser, a reacher-out-to, a leaning-of-her-head-upon you. A fearless child who runs straight into whatever her brothers are doing. She is the darling of her daddy, the precious unbelievable gift of joy to her mama. She is the adored and adoring sister of Owen and Gibson. She croons the name "Boppa" and her grandfather melts like butter on a stove. She fits into her MerMer's arm and lap as if she were built for no other purpose.
A woman child.
Our own Magnolia June.
I offered her part of a cookie but she saw the cherry tomatoes and demanded them instead. She chipmonked those things like she was storing up food for the winter and still wanted more.

And so that was our visit with grandchildren today. The tonic I needed.
After they all left, I drained my fourteen day pickles (we are on day 11) and covered them once again with boiling water. Tomorrow the cucumber molecule replacement project will proceed with vinegar and sugar. And then spices. And more sugar. So far they have been brined and drained and alumed and drained. I refuse to even look up alum and see how horrible it is for us. All I need to know is that it makes the cuke slices as pert and crisp as a soldier on parade. 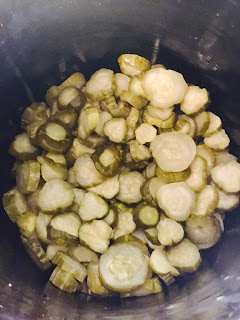 Hell. I don't even know what alum is and I DO NOT WANT TO KNOW SO DON'T TELL ME!
Thank you. I mean, it hardly matters in a food product which has enough sodium and sugar in it to kill you.
But by god, these pickles are going to taste good.
And they will be crisp.

It's been a day. A Sunday. A Sunday which, for survival purposes required a modicum of Keith Richards videos, a hefty dose of grandchildren, a few tablespoons of pure domestic chores, a few paper towels' worth of tear blotting, a goodly amount of hugs and kisses, and serious talks with a seven-year old boy who knows me.
"I named you, Mer," he always says. He is so proud of that.
"Yes you did," I tell him. "And you made me a grandmother."
We nod solemnly about this because it is one of the major marble hard truths of our existence and we both know how important we are in each other's lives.

I must go now and cook our supper.

We got through another Sunday.
Hallefuckinglujah.