Eat Your Veggies! Pickle Them Too! 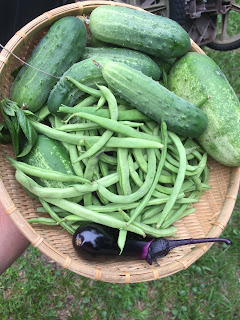 Suddenly I am overwhelmed with produce. The process of pickling going on in the crock on the counter is on Day 11 and I just drained the crispy, salty cukes and covered them with boiled cider vinegar which has six cups of sugar dissolved in it along with spices. In the next two days I'll drain and reboil the pickling concoction and add THREE MORE CUPS OF SUGAR TO IT and on day fourteen, I will can them. Or jar them to be more accurate.

I was going to make an eggplant parmesan tonight but ran late with stuff I was doing and don't have time to salt and drain the little beauties, make the sauce, bake the eggplant, combine all of that with cheese and bake all of that. So. I'll do that tomorrow. Tonight I think I'll cook the field peas.
Why am I telling you all of this? No one cares!

And in the midst of all of this I am trying to book a place in Asheville so we can go and visit our darlings who are there which is involving missives back and forth via email between me and the "host" of the place concerning price. And cook the supper. The field peas are now on the stove just simmering away. And I am thinking about all of the peas I'm going to have and all of the picking I'm going to need to do and all of the preserving I am going to need to do and how when I go out to pick, the fucking bugs bite me and then I'm itching so hard that I want to scratch until my skin comes off and besides all of that...
Oh hell.
It's all too much and none of it amounts to a hill of beans.
Hahahahahahahahahahaha!

I need a wife.

Let me say that I went to the library with Lily and the children today and we had a good time. Owen wore his Harry Potter cape that I made him and carried his owl and when we got there, a man that I've known forever and ever gave me a hug and Gibson said, "Who is that man?" Maggie has learned a new trick which is that when Owen says, "One..." she says, "Two!" and he's trying to teach her three. After the library we went to China First and Gibson had to go to the bathroom and so I took him and he graphically described every second of his experience which was fine until someone else came in the bathroom to use it.
"Honey," I said, "You don't have to talk about it. Just finish up."
And I sighed with the weariness of the ancient old crone that I am and thought about the hundreds of hours I've spent in public bathrooms waiting for small people to finish pooping.
But I bet when I'm on my deathbed I'll think about that and I will not consider it wasted time.
Okay, to be honest? I doubt when I'm on my deathbed I'll think about it at all.
We'll see. But I won't be able to tell you, now, will I?
One of the eternal mysteries of life.

I need to go make a little cornbread.