In Which I Get Over Being Bitchy

Well, it's Friday night and my husband is out in the GarageMahal with a friend of his and they're painting the Cushman. They're doing the fancy painting as this friend is a fancy vehicle painter. They've been working for about two and a half hours and despite the fact that the whole thing is approximately as big as a small bicycle, they have at least another hour left to go.
Sigh.
I don't know why I'm being so bitchy about it. One reason is that Mr. Moon wanted to grill snapper for supper and if he gets started on that at 7:30, it'll be late as hell when we eat and besides that, if he says there's at least another hour then it probably means two.
Sigh again.
Oh who cares?

But the reality is, I AM being bitchy about it. I just am.

I remember back in the younger days of our marriage and something like this would have sent me over the screaming mimi edge. I don't know if that's how you spell that. It might be.
But it would have. I don't get as upset about stupid shit as I used to and for that I am so grateful because it did not feel good- all that anger. I don't even like the way I feel right now which is just a shadow of the way I would felt twenty years ago.

Anyway, I went to town today and had lunch with Hank and Rachel and Lily and the boys and Maggie. Maggie was fussy because she was tired and she wanted to drink what her Owee was drinking which was soda and we wouldn't let her. But we had a good time. We ate falafel and hummus and tabouli and all good things like that and then I went with Lily to Target where we got the boys some art supplies. Lily had promised Owen to get him some paint if he cleaned up the desk and the toys in the play room and he did. I'm not sure what Gibson did to earn something but he opted for silly putty instead of paint. The golden silly putty.
"Maggie wants something too!" he told us so we got her some jumbo crayons so she can practice coloring in her high chair. Lily sent me a picture of her yesterday. She had learned to climb up into her high chair and was mighty proud and happy about that. 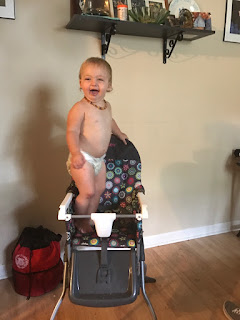 Here she is in the dress I made her. 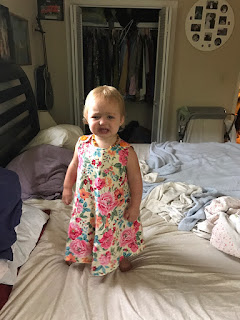 She is not crying because the dress is too big and looks as if it were made out of some great aunt's curtains but because her cruel mother won't let her play with her phone.
Well, that's what Lily said, anyway.

I can't help it. I just think that little girl is the cutest thing in the world.

Ah well. I just took Mr. Moon a martini and told him I'd cook the snapper in the oven and he agreed that would be just fine. And it will be.
See? No need to get upset.

And it might rain tomorrow and it rained last night, heavenly and hard, and whenever it rains I feel like Noah in reverse, having hope, having faith that life will go on.

I'm going to go make up some squash croquettes. I can't believe after all our years of gardening here we finally have a summer where the mildew and blossom end rot and mystery fungus haven't killed all of our squash and cucumbers.

It's the little things which bring us joy and it's best not to forget that.