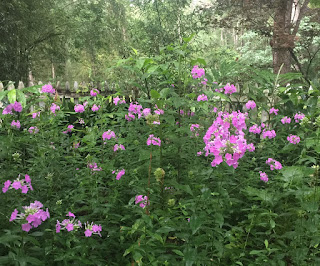 The Phlox are blooming.

It's raining gently and I'm cooking eggplant to make Granny Matthew's eggplant casserole which is so good that people who hate eggplant love it.
Once, my brother had a girlfriend who came for supper and I served this casserole. She was going back for seconds when she asked what was in it.
"Eggplant," I said.
She suddenly decided she did not like it and took her plate to the kitchen.
She was odd. She got a snake for a pet. I secretly thought she only did that so that people would think she had a personality.
That is not who my brother married. The woman he married does have a personality.
And no need for a snake.

Mr. Moon is working on the dryer. It has not been drying well lately. I determined that the lint trap was filled in such a way that I could not clean it despite the fact that I clean the lint screen every time I use the dryer and he brought in his shop-vac and took care of that problem. It still did not work well. It heated and it tumbled so common sense said that the moisture was somehow being blocked from escaping.
He pulled out the machines (the dryer is stacked on the washer) and removed the big silver hose which takes the moisture and I assume, some of the lint, out.
He has vacuumed everything and cleaned out the hose and is putting it all back together. If it were just me, up to me alone, nothing like this would ever happen. I think about an Anne Tyler novel I read once where the family in it viewed things rusting or falling apart or falling down or becoming inoperable as just an inevitable part of life which none of them could no more possibly change than they could alter the passage of time.
It struck me that I am one of those people.
And I know I am.
This makes me feel so inadequate as a human being. I mean, I can clean a hen house or weed a garden or change a baby or wash the dishes or get gas for my car (barely) but these things are merely maintenance and have nothing to do with repair or renewal or restoration.

Dottie took a break off the nest today to go run and take a dirt bath and eat and drink and while she was gone, I looked to see what she is sitting on and discovered that there are only three eggs in the nest and those are the ones I gave her.

Bless her heart, bless my heart, bless Maurice's heart. She will NOT stop getting in fights and her face looks like she's a member of the Fight Club and I don't know how to stop her. 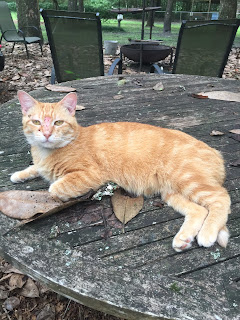 And her face looks worse tonight because she attacked Jack today and he, as always, won.

She's Scarface and I expect to walk into a room and find her hoovering lines of coke up her nose and screaming in cat-tongue about how the world's out to get her.

I'm a little bit crazy today. It's okay. I was normal yesterday so what do you expect?

Bless your heart too. I mean it.