Lily got her hair cut today and I went with her and the children to wrangle them while she was in the chair. We went to Costco first and got wet coming in from the parking lot as it was raining nicely. We had samples and as usual, Owen collected his to eat all at once. I sometimes think he does this merely to infuriate Gibson by eating his saved deliciousness to in front of him. Gibson understands that this is fair- he's already eaten his- but it still makes him crazy.
I am sure this only makes Owen enjoy his ravioli and cheese all the more because they are brothers and this is what brothers do.
As Lily says- all day it's play, play, fight, play, play, fight. 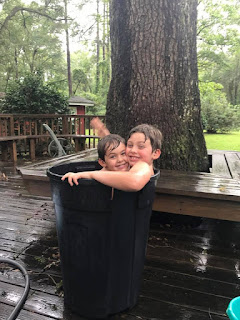 There's a picture I stole from Facebook of a playing moment. The next moment Gibson was probably saying, "Mommy! He said he was going to kill me!"

I'm not sure that Lily is going to survive this summer.

Anyway, where was I? Oh yeah, headed to St. Melissa's hair salon.
We love this woman. I have mentioned her and her husband, our Juancho, before. Melissa has toys in her room in the salon. And an iPad. And she lets the children play with them. And then, when it's all over, she opens the bottom drawer on the magical cabinet and finds them Blow Pops.
What could be better?
Gibson begged to have his hair cut too but Lily said, "I am not paying for boy haircuts in the summer!"
Wah, wah, wah.
I think he just wanted to interact on a more intense level with Miss Melissa as he calls her.
So there was toy playing and iPad game playing and Maggie walked about and played with whatever the boys would let her have and then she pooped and I changed her diaper on the floor on a changing pad and while all of this was going on around her very feet, Melissa gave Lily the cutest haircut ever. 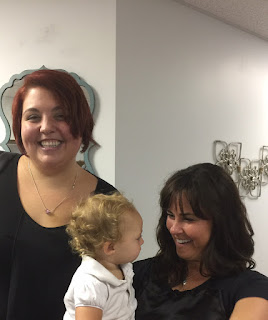 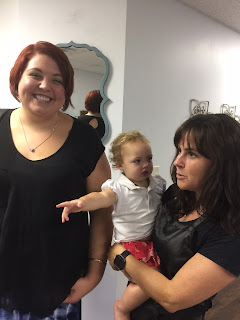 And then Maggie didn't want to leave with us but wanted to stay with Miss Melissa. And we asked her to go to lunch with us and Owen was bereft when she couldn't.

We all do.
(Sorry Juancho.) 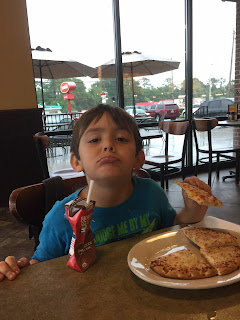 He was making a face but he did let me take his picture. Progress.

After all of that, we went home. I don't know about Lily but I had to take a nap.
(And I wouldn't have been surprised if Melissa hadn't had to take a drink.)

So it was a good day in that my mood of existential angst and depression didn't have enough room to take over, what with the child wrangling and so forth. Plus, those kids make me laugh so much.
When I'm not thinking about pinching their little heads off.

The sun has come out just in time to paint my yard gold as it sets but according to the weather widget we're supposed to get more rain tonight. Getting wet on our way in and out of places is nothing compared to knowing that the aquifer and lakes and rivers are getting some much-needed fresh water. We all have umbrellas but damn if we can ever remember to take them places with us. And as I heard one mother say to her little fellow as they came into Costco, "See? You didn't melt one little bit. I told you!"

All right. That's what happened today in the merry, merry land of where I live.