Something New To Put On My Resume 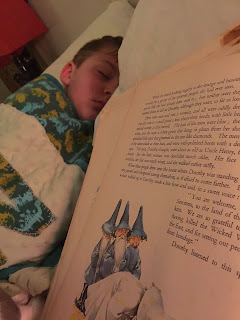 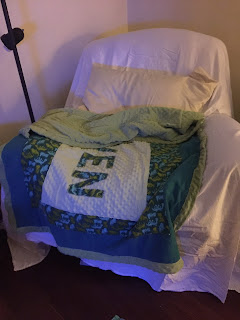 Then he took his bath and got too hot and had to lay on my bed with the fans going on him and then I got out my ancient copy of The Wizard of Oz and started reading to him and next thing I knew...the boy was asleep.
He's a good one to sleep with. He doesn't move a lot or make noise. However, he reported this morning that I kept him awake all night with my snoring. I asked him why he hadn't moved to another sleeping place and he said, "Too soft."
"My snoring was too soft?"
"NO! The bed!"

I think his grandfather could probably relate.
I asked Mr. Moon if he and Gibson slept well.
"Oh hell no," he said. "He decided to sleep in my bed."
Gibson's a cuddler and a mover-about. But he's sweet. On the phone he told me to kiss his mama for him. I said I would and I will.

We've had some major excitement here already today. Mr. Moon couldn't get his auction bidding site up on his computer at the hotel where he and Gibson are staying in Orlando and I had to bid on a car! Oh my god. You have no idea how stressful and exciting this was! I got it, too! They do a simulcast of the auction and it's a real auction with the auctioneer singing/chanting/rattling off the stats and bids but luckily, it's all on screen, too.
Phew.
"I need a drink now," said Mr. Moon when it was all over. He was on the phone with me the whole time coaching me through it.
Instead I think he's taking Gibson swimming in the pool.
Owen and I are going to go pick up Maggie and Lily and go to Costco and do our in-town stuff.
The chickens have all been let out and Owen's had watermelon and cheese toast for breakfast and Maurice and I have shared our yogurt. So we're just about good to go.

Let's all have a good one, okay?