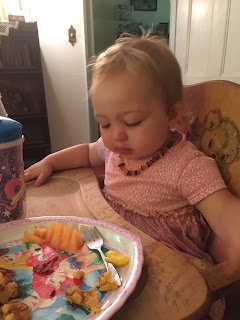 We had a Sunday morning breakfast here in Lloyd today. Today's menu included sweet potato and banana pancakes with bacon, cantaloupe, and mango. Quite nice. Of course, the best pancakes are the ones eaten out of hand later when the formalities of table sitting are over. 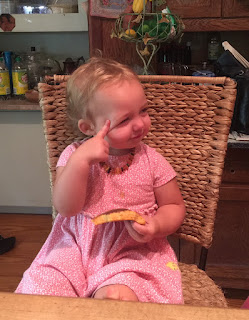 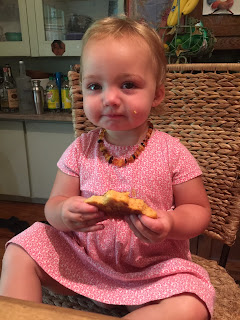 And of course, after you've worked up a little more appetite doing some library horseback riding. 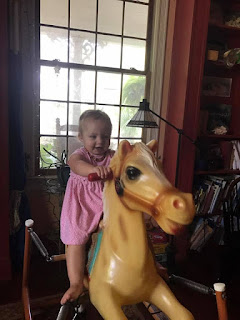 That girl loves to ride the horse. She also loves to go back and forth between her mama and her Mer and her Boppa with kisses and hugs. And snorgling on the bed with tickles from her mama and her brother Gibson. 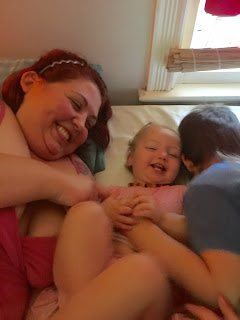 Gibson's being completely camera shy these days but he still had a good time. He let me snuggle him like he was the baby he once was. I told him that mommies and grandmommies love to pretend that their grown up kids are still babies. He said, "It's like you get a second baby!"
"Exactly!" I said as I held him so close to me that I was worried he could not breathe but he did not complain and seemed to love the closeness, the memories. He is the sweetest boy, that one.

Owen brought us presents to thank us for the art supplies. At breakfast he gave his Boppy and me both two pictures he had painted. Here are mine. 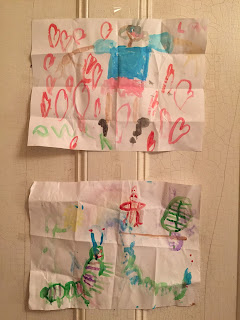 That's me in the one up top, throwing hearts around. Oh, how I love that boy! The second one has two caterpillars and a bird and a tree. Nature.

Then Owen made us both go outside to find our other presents which he had hid. I had to have help to find mine. I am obviously blind. 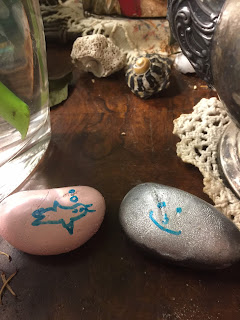 Two nicely painted rocks! Mine is pink and has a fish on it and Boppy's is silver and has a smiling face.

We felt like it was Christmas.
Then Owen helped Boppy cut his hair. 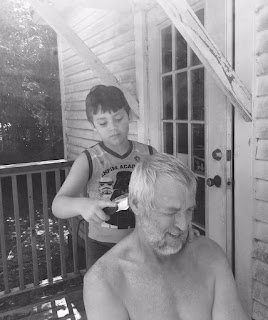 He did a good job except for the part where he "balded" his grandfather, right on top of his head. It all turned out okay, Mr. Moon just got a shorter cut than he'd originally planned for but trust me- this is what happens every time so no big deal at all.

And so it was a beautiful Sunday and Owen helped me pick cucumbers and green beans and helped Boppy check for eggs. I have decided that my new hens are never, ever going to lay and that's that and they will just be hungry pets for the rest of their lives. At least I can use their poop in the garden and they make plenty of it. Mr. Moon reports that he heard Joe Cocker trying to crow the other day but I haven't had the pleasure of hearing anything either from him or his brother, Little Richard.

After the little family left to go home so that hopefully Mama could get a nap, I cleaned out the refrigerator and that always feels so good. It's like a damn operating room in there now, so clean and bright with no mystery puddles or sticky gunk in the bottom of the cheese drawer or vegetable drawer. That should last about two days.

My husband and I just walked out to the hen house to check for eggs and we found one Miss Dottie egg in there and one Miss Camellia egg in the pump house nest. Violet took the day off or else is laying somewhere else again. One never knows.

And so it's been a Sunday and I've just seen Mick have his way with poor old Miss Trixie and now Joe and Richard are having their pretend cockfight, pressing breasts up against each other and jumping and flapping their wings and it's hysterical because they spend all day every day within a foot of each other, convivially sharing scratch space and nap space like two devoted brothers, which they are.

And that's the story of a Sunday in Lloyd. The promised rain never really arrived beyond a sprinkle and this seems to be how it goes every day now but at least it's not terribly hot.

Mr. Moon has a new haircut and the field peas in the garden are forming  in their swelling pods and the chickens are paying close attention to the whistle of a hawk overhead. There will be leftovers for our supper tonight and I ain't got no complaints.