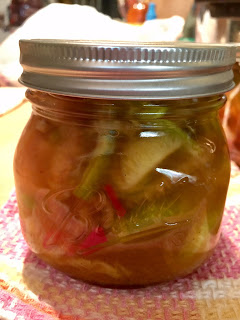 Ten more pints of pickles, these the Sweet and Hot Curried ones with cucumbers and green beans and tiny eggplant, golden raisins, red onions and some peppers so hot that hours after cutting them my hands are still stinging. And now my kitchen smells like Buddha's mother's kitchen on the days she made pickles. I feel certain of this.
I am a picklin' fool.
Confession:
I went to Walmart today.
Mea culpa, mea culpa, mea maxima culpa but hey! I needed some damn dill seed and Publix doesn't have it and I was afraid the Winn Dixie in Monticello wouldn't have the fresh ginger which I also needed and blah, blah, blah, excuses, excuses, excuses.

After Walmart, I went to Publix where my friend Judy checked me out.
"Where've you been today?" she asked me while I was standing in line behind the woman she was checking out before me.
"Oh, Judy. I hate to tell you."
"Where?!"
"Walmart."
It was only then that I realized the woman in front of me paying for her groceries was wearing a Walmart employee shirt.
Whoops!

But overall it's been a good day. I have felt...normal in all regards.
Which is not normal for me but what I imagine normal to feel like. I didn't hurt overmuch in any area of my body, I didn't worry overmuch about anything. I didn't get anxious in Walmart, or at least not very much. A normal amount of anxiety, I would say. For Walmart. There weren't that many people there and the ones that were there seemed relatively... normal.

And it just felt so good, knowing I was going to come home and fill up the canning kettle again and slice vegetables that I've grown my very own self and boil a pickling syrup with vinegar and sherry and spices and garlic and ginger and sugar.
And I was happy doing all of that.
I am a simple woman and that's all there is to it.

When I was in the Walmart, I couldn't help but see some of the Pioneer Woman's products and there was a part of me which thought, "Jesus. She started out with nothing but a blog about cows and her husband and her kids and some dogs. And now she's the head of an empire and she's on TV and revitalizing her little town and what the hell am I doing?"

Making pickles, that's what. And let's face it- I no more want to be head of an empire than I want to revitalize Lloyd. That would suck.
Although I wouldn't mind if I could get a decent breakfast here without having to cook it myself. Maybe the truck stop owner will actually rebuild and put in a decent kitchen. Maybe even in my lifetime.
We'll see.

Meanwhile, I'm happy with what I have and wouldn't trade my little life with my garden and chickens and cats and man and kids and grands for anything in the world and I make a very fine breakfast in my very own kitchen with my very own chicken's eggs and that is just the truth.