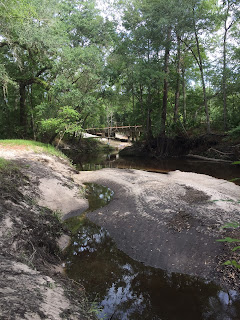 This morning I decided to walk down Old Lloyd Road, or Highway 158, to Lloyd Creek Road. A walk I love except for the part on the highway because of long grass bordering the road which means when trucks and cars go by, I have to step off into places where I cannot see what I might be about to step on.
But all went well and I walked for about an hour, trying to burn off anxiety, trying to make up for the rain-excused walkless week so far. When Hank and May were little and we lived about ten miles from where I live now, we used to go right there to the place in that picture above to get cool in the iced-tea colored water. 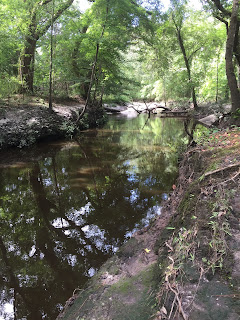 The creek is beautiful right now. Still and high, calm and clear, except for the color which comes from the tannins- the leaves and bark of the trees which line it. 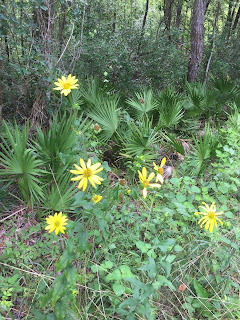 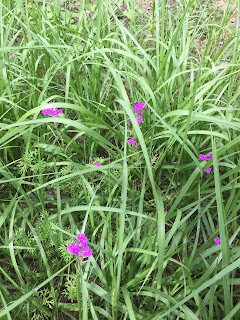 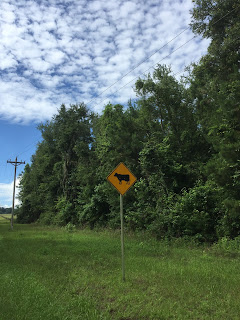 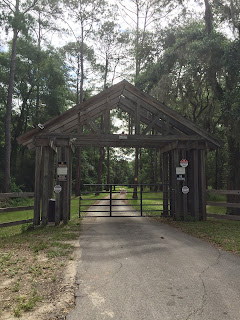 lies the mysterious and strange Nautilus Foundation.
In the article I linked, there is a quote by a "student" who lived there and described the place. I am almost certain that the quote was taken from one of May's blogs. She lived there years ago for a short while, taking care of Francois Bucher who built the place.
Here is the quote.

Yes. There is magic where I live but most of it is hidden away, tucked beneath railroad trestles or deep in the pine woods. Creatures and flowers and running creeks and strange places where Einstein's couch once sat and my daughter once lived, making smoothies for the curious old genius who built and gathered treasures here for a reason I do not know, nor does it even matter.